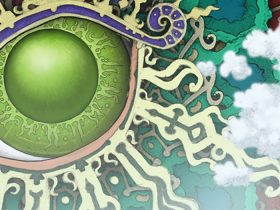 The gods are dead. When the dredge, an ancient race of enemies clad in black armour, had threatened to overrun the world, the humans and brutish varl formed an uneasy alliance that saw them successfully drive them back into the northern wastes. Many years have passed, and, as the story in The Banner Saga starts to unfurl, we first learn that the world’s people now live in an era of growth and trade. But, not for long.

Even from the opening five or so minutes, it’s hard to not to come to appreciate the tremendous effort that Stoic has made to breathe life into their fictional world. With Norse mythology serving as its inspiration, your modestly-sized caravan steadfastly marches across a snow-clad landscape towards Strand, which, as we’re told, is the largest of the trade cities on the varl-human borders. Birds fly overhead and longboats gently drift along the calm, icy seas in the distance, as we soon see the city loom into view. It makes for a strong early impression, signifying the exceptional art direction that will readily captivate as you play through this epic fantasy tactical role-playing Viking saga.

The Banner Saga sees you tread the path of two characters whose separate journeys, ultimately, become woven into one. That starts with the varl Vognir who, after killing a rebellious chieftain that had commanded his men to waylay merchants as they travelled into Strand, is tasked with escorting the human prince Ludin to Grofheim to renew an alliance between the two races. The other character is the human Rook who, while out hunting with his daughter Alette, stumbles upon a lone dredge before soon discovering that their village has fallen under attack. 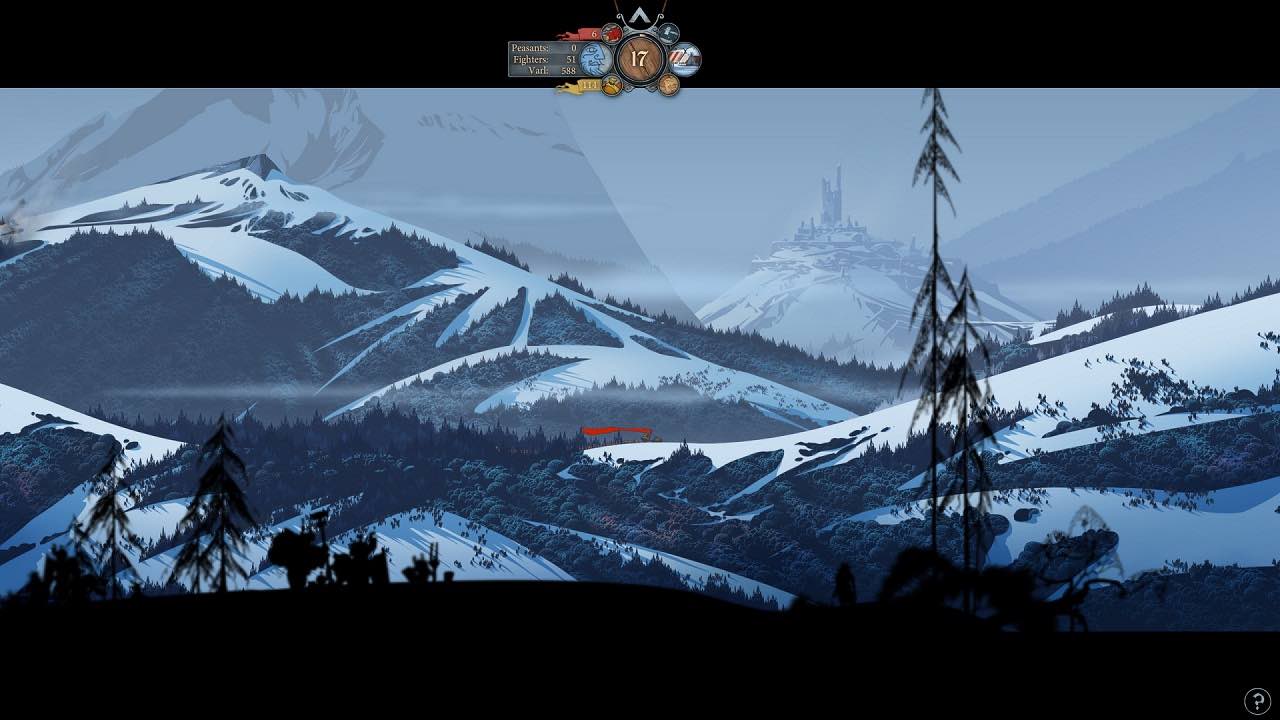 It is the return of the dredge that abruptly throws The Banner Saga’s world into chaos in what is the first in a three-part series. Believed to have long been extinct, the silent stone-like creatures have started to emerge from the northern wastes and much of your time will be spent fleeing as best you can from them in the opposite direction. In this part-resource management, part-tactical role-playing game, the experience is split between looking after those that rally to your banner in choosing to join your caravan and fighting back against the dredge in turn-based battles.

The story is largely told through text-based narration and dialogue, although there are a handful of voiced cutscenes. You can expect to be faced with moments where a decision that you will be forced to make will lead to one of several outcomes, which, understandably, will result in you umming and ahhing about every choice at great length. These situations help to make the journey feel all the more personal, the player becoming invested in the caravan’s wellbeing and wincing when a mistaken decision ends up losing you fighters, clansmen or something worse. That you can choose to let these outcomes carry across to The Banner Saga 2, and, eventually, The Banner Saga 3, makes your arduous adventure a more meaningful one compared to most.

When travelling, you will need to consider your morale, supplies and population. Maintaining a high morale will let your characters start battles with more willpower, whereas supplies, once depleted, will see your population start to dwindle thanks to starvation and your morale will plummet as a result. When you reach towns and villages you can use Renown, the only in-game currency, to restock your supplies, but this is also required to rank up your characters to make them more devastating on the battlefield. 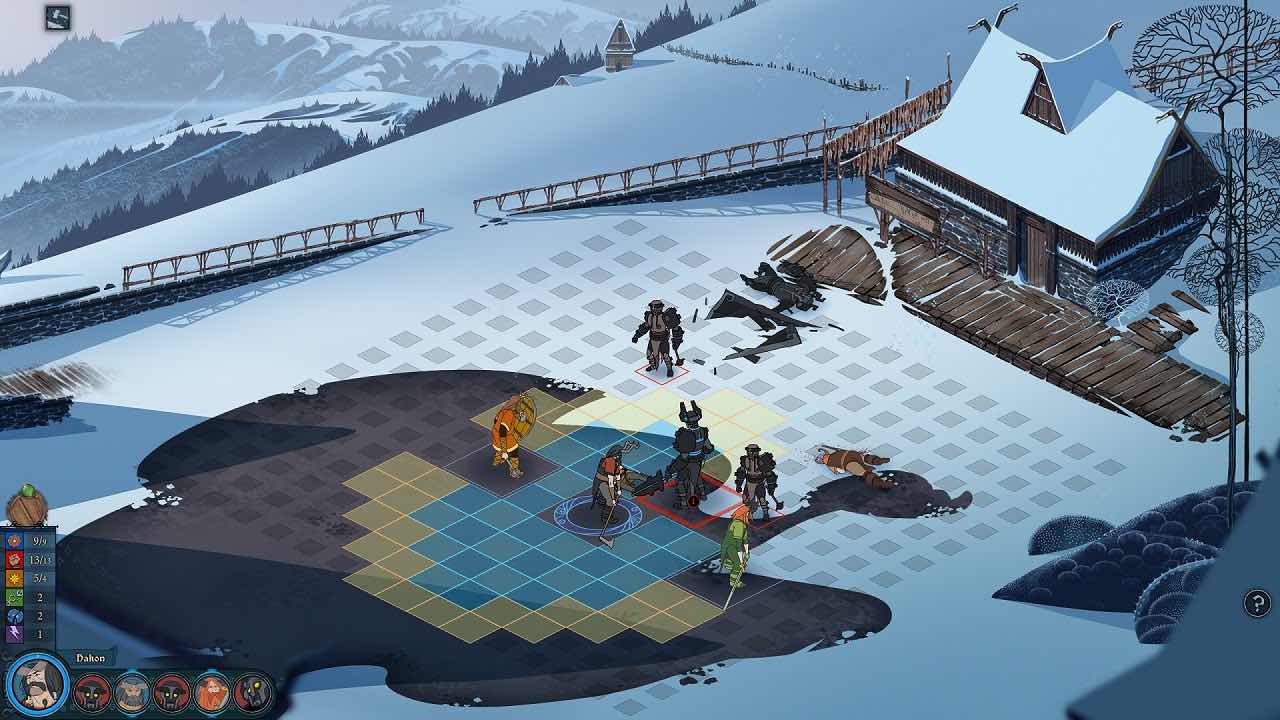 You’re never at risk of being confused by the systems that are at play, but I certainly soon found that the Renown that I started to earn was in short supply. Keen to make sure that the caravan remained well-fed, I prioritised resupplying food and mead over levelling my heroes – which, in hindsight, was probably a mistake. I still think that The Banner Saga would be better with two in-game currencies, like Gold and Renown. As, at this point, I wasn’t sure whether my under-levelled party would place me at a disadvantage in the next games.

As for the battle encounters, you will first have the chance to choose the six hero characters that you would like to command. The varl, fearsome horned giants, are slow but strong and typically wield two-handed weapons, while the humans are nimbler but weaker and can be found wielding a sword and shield, bows and spears. It is best to have a mixture, allowing your chosen party to lean on each other’s strengths while allowing you to overcome any particular weaknesses.

In combat, there are several character stats that you must take into account: Armor, Strength, Willpower, Exertion and Break. Armor, unsurprisingly, blocks damage, while a character’s Strength not only represents their health but how much damage they can deal. Willpower is a limited resource that can be used to move further, use a special ability or hit an enemy harder than normal, while exertion determines how much Willpower you can use on one action and Break represents how much damage you can deal to an enemy’s armor per hit. Phew. Hopefully that all made sense. 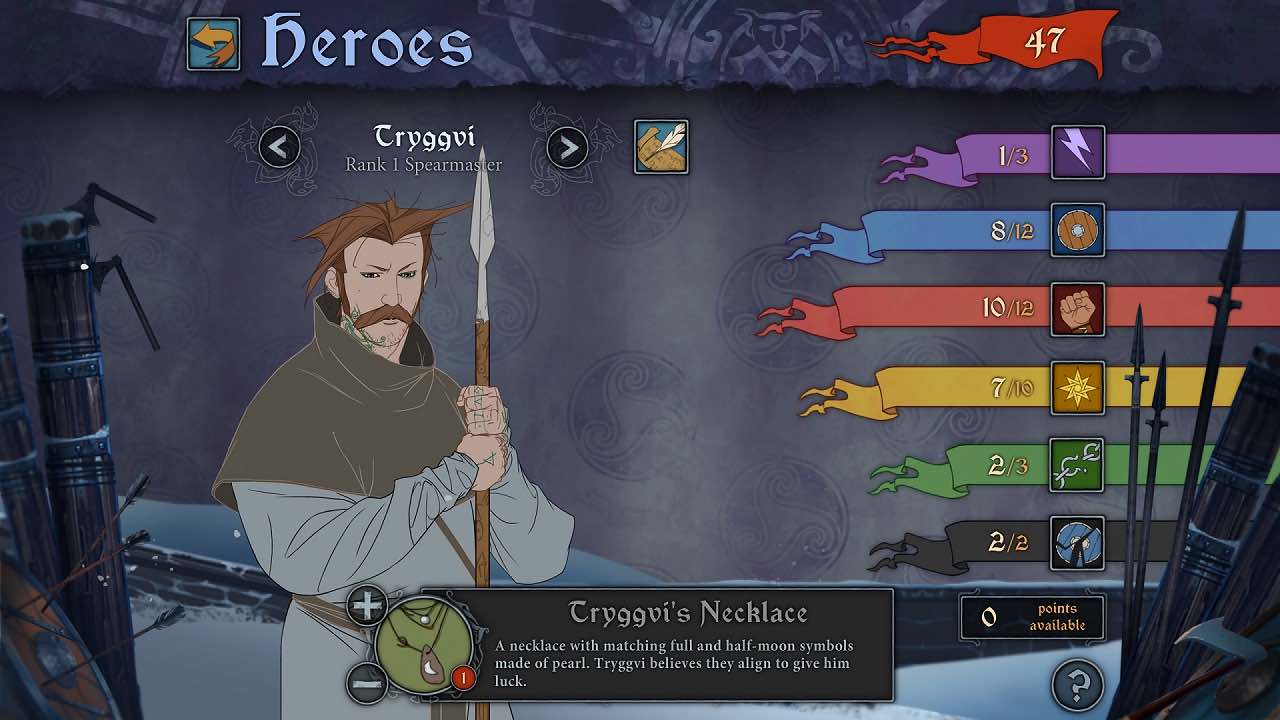 With the character portraits showing the order of initiative, you alternate with the enemy in having the chance to act. You are free to move across the tile-based maps, which, largely, will see you look to move in attack range of your enemies. You can choose to weaken an enemy’s Armor to land more devastating blows to their Strength on your next turn, as, once their Strength hits zero, they will fall in battle.

There is no permadeath in The Banner Saga, meaning that if one of your characters is brought to their knees they become injured. This will weaken them in future battles and you will need to rest in Camp for them to recover, a process that will use up more of your supplies – an added benefit being that it will improve your caravan’s morale.

The rest of your time will be spent dealing with whatever happens on the road. That could see you choose how to punish a drunken clansman that nearly sets a supply wagon aflame, or which path to tread in the hope of evading dredge forces. There’s enough humour mixed in with the troubling circumstances that your caravan finds itself in, with every interaction leaving a lasting impression.

The tale that this first chapter in The Banner Saga weaves will have you gripped from start to finish. The player is left to exist in a world that has been meticulously crafted, whether that be the breathtaking art direction, the riveting efforts at world-building or the gameplay mechanics that underpin the experience. It is the difficult decisions that you must make that let it become more meaningful, even if some of your actions will ultimately lead to heartbreaking consequences.