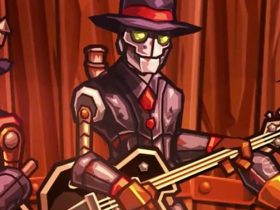 This is it. After painstakingly working to breathe life into their Norse-inspired fantasy world for more than six years, we can but watch as it continues to crumble around you in this final dramatic chapter. The Banner Saga 3 is harrowing, an impression that you’re left with straight away when the once jubilant theme that composer Austin Wintory had penned for the epic Viking role-playing games is hauntingly interrupted.

With so many questions having been left unanswered, many have had to wait a long time to see how The Banner Saga would come to a close. It’s right that we should feel unsettled, at least. The choices that I made in The Banner Saga 2 saw the King grant my travel-worn caravan sanctuary behind Arberrang’s seemingly impenetrable walls, but now Rook’s forces are tasked with repelling the forces that Boersgard governor Rugga has rallied to his side to lay siege to the human capital.

And, as the Darkness continues to unrelentingly creep across the land, Iver, Juno, Eyvind and the Ravens, under the protection of a golden dome of light, apprehensively journey inside in an effort to dispel it completely. With the hulking form of Bolverk, revived by the world-eating Serpent after Manaharr was collapsed on him, giving chase behind them, the narrative pieces that are in place make for a compellingly gripping experience that treads in expected and equally unexpected directions. 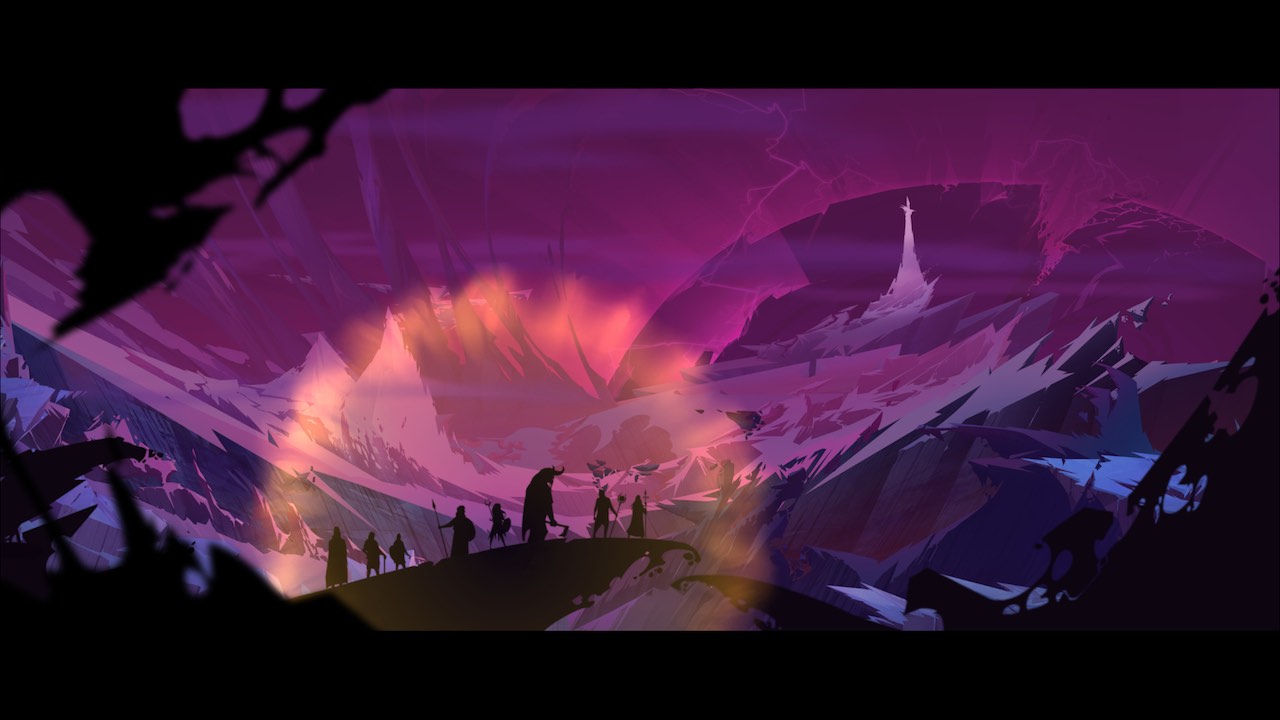 For those that have played The Banner Saga and The Banner Saga 2, you can choose to import your saved game to see your past actions carry over to this final chapter. If not, and, at this point, it’s an easy recommendation to play through the series in entirety, you can select whether Rook or Alette is the character that continues to bear the responsibility of leading the caravan.

The Banner Saga 3 continues to look the part – the intricately hand-painted animations, which had once taken their influence from Disney artist and illustrator Eyvind Earle’s work, still effortlessly stand apart from anything else that you will have played in recent memory. With Rook’s forces doing their best to hold their ground in Arberrang, it is the chance to witness how the Darkness has impacted the rest of the world that often sees the game at its most captivating. Your push into the unknown reveals that the now lifeless lands that look melted, and, as Iver puts it, “forests curled like fish hooks.”

This will not only see you wander landscapes that have been imbued with an unnerving purple but, where The Banner Saga 2 had introduced the horseborn as newfound allies, leads you to encounter the warped. These disfigured humans, Dredge and horseborn have been left corrupted by the Darkness, to become more enemies for you to lock weapons with and be wary of on your journey. 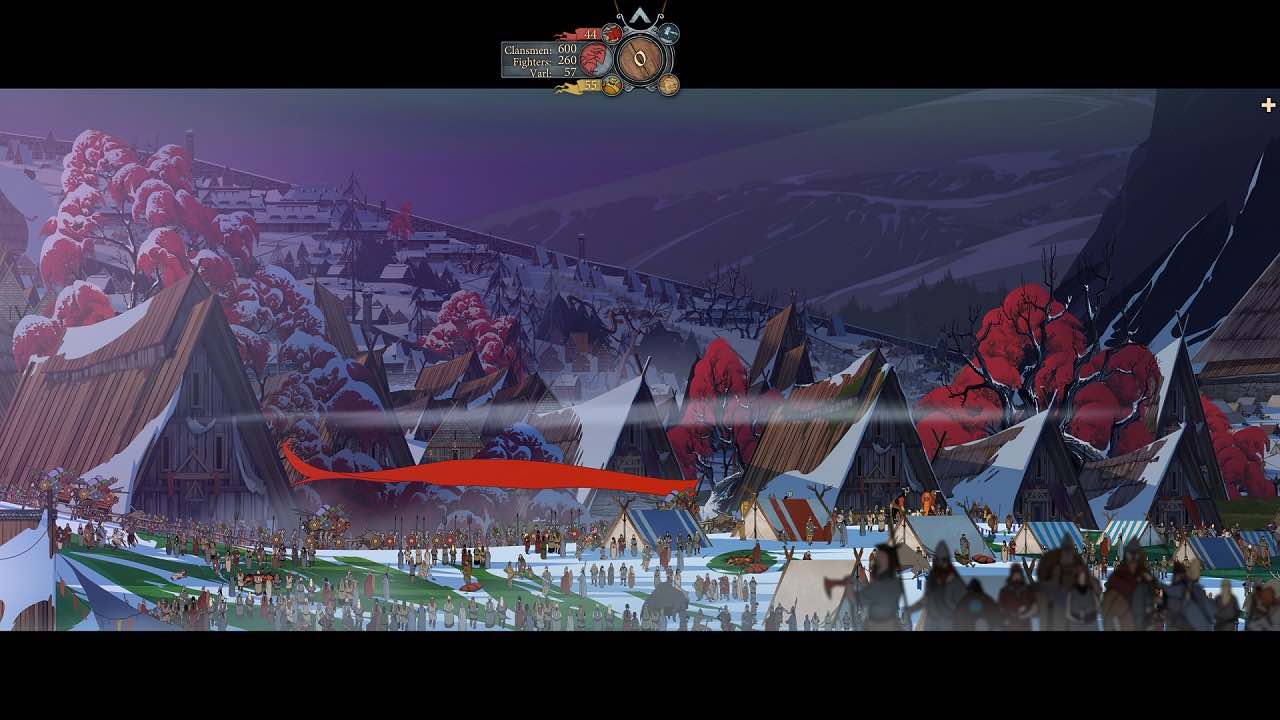 The experience continues to lean heavily on text-based narration and dialogue, forcing the player to make challenging decisions that, at this point in time, are often in moments of crisis. I wouldn’t want to risk somehow managing to spoil anything, but, whether fighting for survival in Arberrang or enduring the Darkness, there are far more hardships that you must face in this last chapter. There was even one outcome that distressed me so much that I had to reload my save to choose another path, even though it went against what I really wanted to do in the first place.

It is in the battles and character progression that the other changes and additions come into play. Burning fires scorch the tile-based battlegrounds that, on Nintendo Switch at least, can cause the frame rate to become inconsistent, while, elsewhere, ice pillars can be shattered to damage nearby enemies. Whereas those sheltered in Arberrang can continue to use the horn to replenish their Willpower, in the Darkness your party are instead granted the chance to use the Valka Spear – striking your enemies with forked lightning to help whittle down their Strength that arcs to any other units stood diagonally.

Developer Stoic has also introduced something that they refer to as Waves Combat. This is, as it sounds, basically the chance to fight in multiple battles that can see you rewarded with a powerful item if you topple the enemy boss that awaits you at the end. The problem is that, with a difficulty that felt generally higher to the previous games, these situations can quickly result in most of your characters becoming injured and requiring rest – meaning that you must swap your strongest characters out for others, or choose to turn tail and cut your losses. 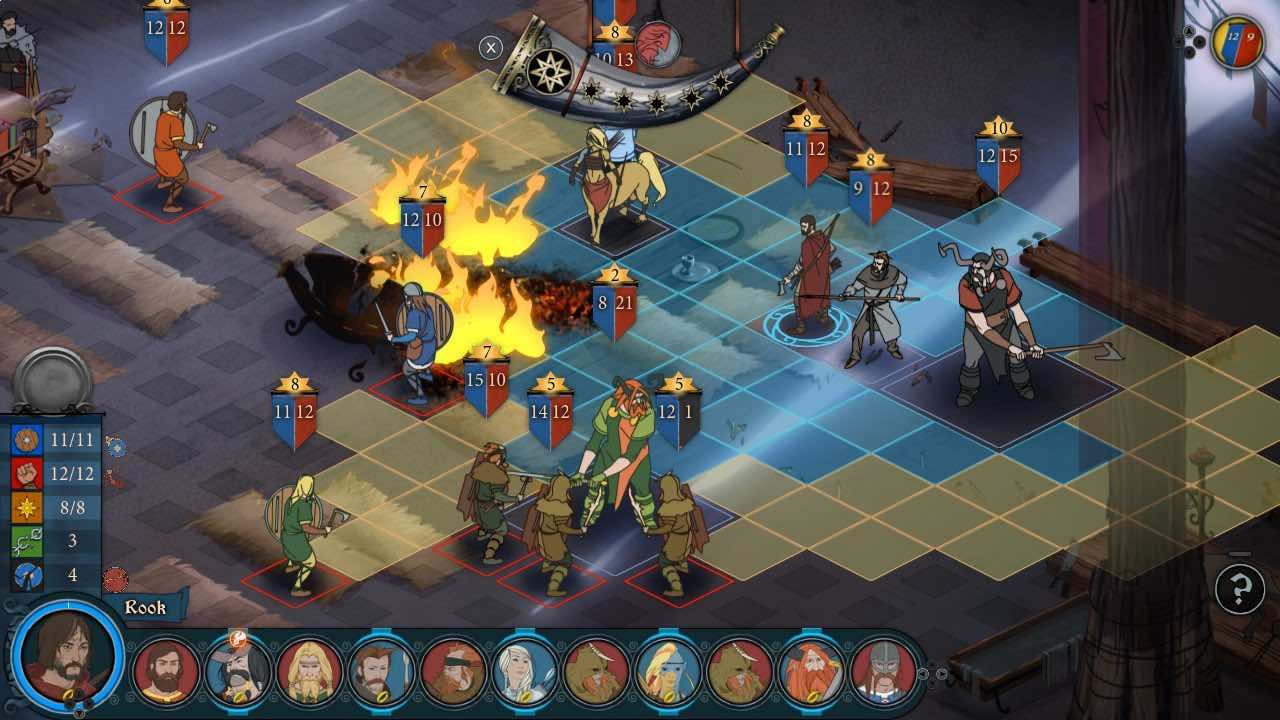 With few chances to restock your supplies, which undoubtedly adds to the ever-increasingly desperate circumstances the characters find themselves in, you can at least focus on spending the Renown that you earn on levelling your characters. It will be necessary, too, thanks to the far hardier enemies that you will encounter compared to before, something that the developer has looked to partly alleviate with Heroic Titles. Shield Cleaver, The Unmoved, The Granite One and more, these are costly upgrades that continue to strengthen your characters beyond their basic stats.

The Banner Saga 3 is a revelatory experience, at long last presenting answers to the questions that many have had since Rook first rallied clansmen to his banner in Skogr. With multiple endings that your actions can steer your adventure towards, it delivers a thunderous conclusion to what, on the whole, has been a phenomenal trilogy. It remains a perfect fit for Nintendo Switch, and, now that all three games have hit the portable home console, there isn’t a better time to set out on your arduous journey.