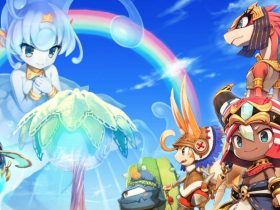 The game follows teenagers Guren, Ceylan, Chooki and Toxsa, as they stumble into an inter-dimensional portal only to reemerge in another world as the legendary Tenkai Knights: Bravenwolf, Tributon, Lydendor and Valorn.

Players will step into the metallic shoes of one such hero, as they look to stop the villainous Vilius and his army of shape shifting robots from destroying planet Earth and Quarton. Characters can be customised with more than 100 parts, work co-operatively in Mission Mode, or take on up to four players in Versus Mode.

Spin Master and Viz Media Europe plan to support the game’s arrival with toy lines, as well as the accompanying animated TV series which inspired it all.