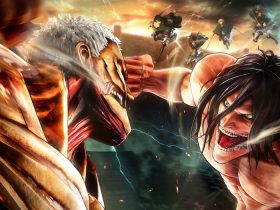 Now available to pre-order on the Bandai Namco Store Europe (£74.99), this will contain a physical copy of the game, the Tales of Vesperia Memorial Art Book, four-disc soundtrack, collectible cards set, pin badge set, Chibi Chara stickers set and a Repede SteelBook case – which all come in a Premium Edition Box.

Whereas in North America can pre-order the region’s Premium Edition on the Bandai Namco Store ($99.99). This comes with a physical copy of the game, the Tales of Vesperia Memorial Art Book, an exclusive anniversary diorama display case with Yuri, Flynn and Patty acrylic keychains and a Repede SteelBook case.

In this remastered version, the classic JRPG has an upscaled screen resolution, new playable characters, events, locations and costumes that were never released outside of Japan. Those playable party members are Patty Fleur, a young pirate searching for her lost memories, and Yuri’s rival and best friend, Flynn Scifo.