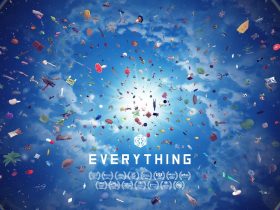 Everything Out On Nintendo Switch Next Week

Puyo Puyo Tetris remains a mainstay on my Nintendo Switch, ready to load whenever I’m up for some Tetromino-dropping, Puyo-matching action. Its story mode is stupidly entertaining, the visuals so chunky and colourful and, of course, the gameplay itself always satisfying and tough. I’ve said it before many times already but Nintendo’s portable slash home console hybrid has been the perfect home for the puzzle genre, a statement only further cemented after playing Nintendo’s excellent Sushi Striker: The Way of Sushido.

At its core Sushi Striker: The Way of Sushido is a tile-matching puzzler with a competitive twist. Facing off against an opponent, you’ll each find in front of you four horizontal conveyor belts sending different coloured plates of sushi from left to right and vice versa. The aim is to link and eat sushi plates of the same colour, so your character can then use the empty dishes as projectiles. It’s all about accumulating damage on your opponent with each plate colour having its own power that increases the more you can throw consecutively. The size of each chain you link also has an impact too, with higher stacks of plates yielding higher damage and also adding to your Jubilee Gauge. Fill it and you’ll activate Sushi Jubilee, 12 seconds where your attack power surges further and longer combos are easier to achieve. This is where the tide of battles can often turn when done well. Similar to a fighting game your end goal is to essentially whittle away at your opponent’s health bar until emptied. 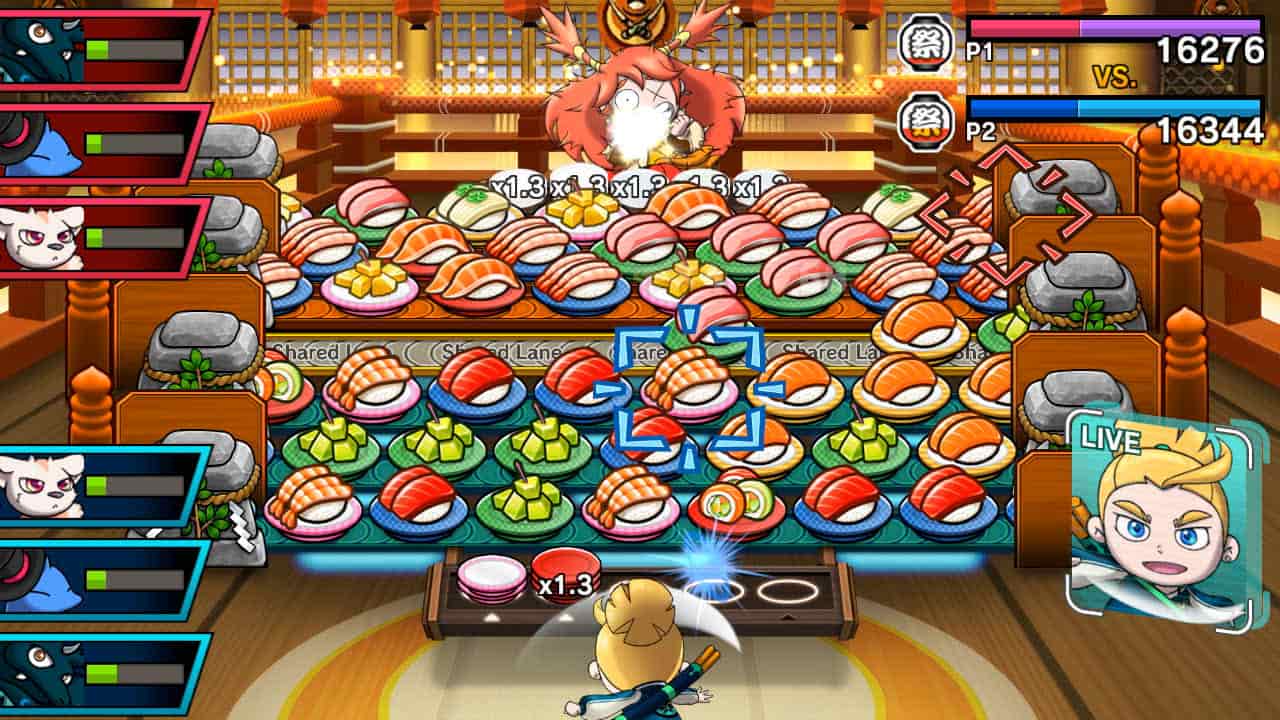 Not just your typical puzzler, Sushi Striker: The Way of Sushido presents the player with an over the top, zany story that takes place in a world where sushi has been banned following the brutal Sushi Struggles. Playing as Musashi in either a male or female form you join the Sushi Liberation Front as you set out to topple the evil Empire, solve the mystery of Musashi’s missing parents and generally bring sushi back to the people. This ridiculous premise is one of the reasons I found myself enjoying the game a lot more than most puzzlers. It’s daring to try and be different and offer the player a little more personality.

Your adventure will take you across a linear world map, tackling enemy after enemy as you go. The game does a decent job easing you into its surprisingly numerous mechanics, first introducing you to the basics of linking like-coloured plates before advancing onto weapon-based capsules, knocking your opponent’s stacks over and more importantly using Sushi Sprites.

The Sushi Sprites themselves are cute Pokémon-esque creatures that join you in battle not only strengthening Musashi but also allowing you to use their special ability. Jinrai is the first Sprite you come across who yields the power to turn all sushi plates into one colour making for an easy link of 20-plus. As you progress though, you’ll uncover more of these critters (with 100 in total to find) each sporting abilities that not only affect you but your opponent too. To begin with, it’s fun testing out each Sprite’s magic but as the difficulty rises you’ll soon start to realise that the timing of these can play a key role in your victory. You might want to save the health raising Sweets Paradise for when you find yourself close to defeat for example or activate the damage buff Electrozap when you have a large stack of plates ready to go. With three Sushi Sprites at your side in battle, you’ll often find yourself experimenting with different combinations especially as enemies show up with their own mixed team. 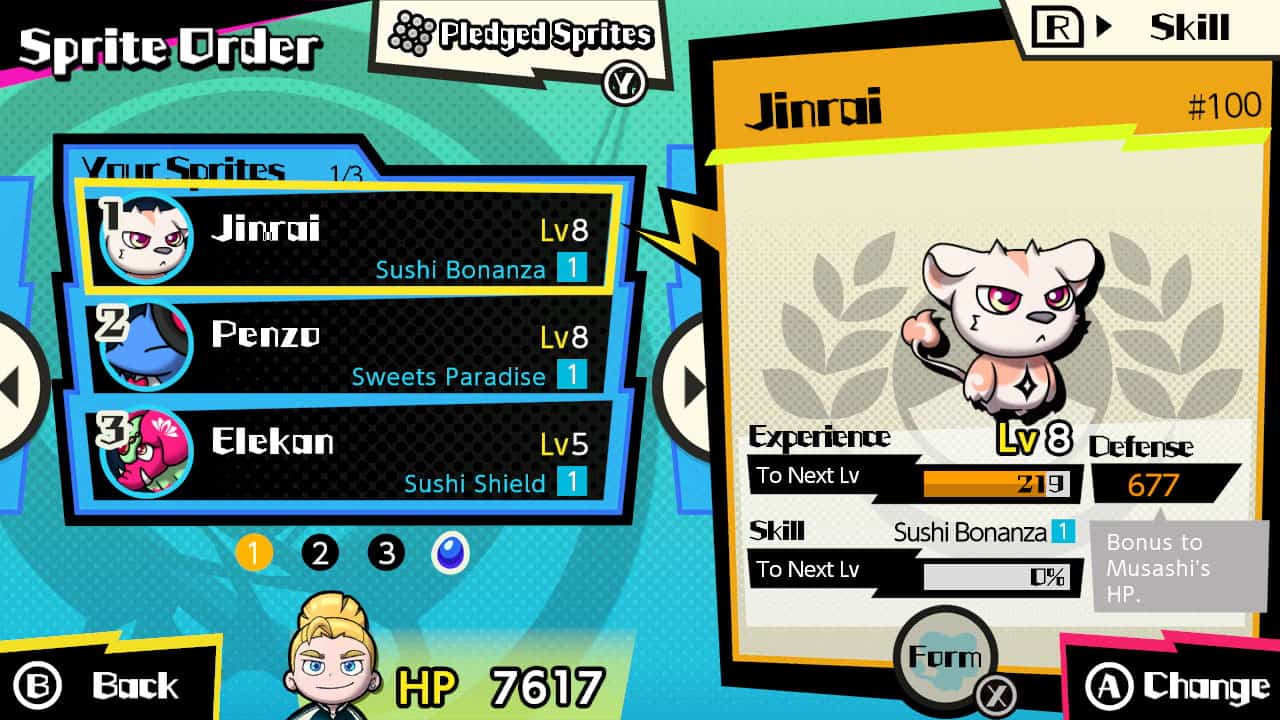 Every match will reward the player with experience, which not only upgrades Musashi’s level but also his or her Sushi Sprites in play too. As you level up, stats like defence and health will grow – an essential process if you’re to tackle the increasingly tougher series of opponents.

Beyond the RPG-lite elements though you’re also able to select types of gears that affect how the conveyor belts react as well as your favourite type of sushi that, when eaten enough, will trigger a perk that again will aid you in battle. You’ll even find in-game achievements too that help you improve your “Striker Rank” and grow your hub. Put simply this game has a lot more going on than it initially lets on.

Which is what keeps Sushi Striker: The Way of Sushido fun and challenging. Just when you think you’ve seen everything the game has to offer a new face will show up challenging you to a battle with capsules that freeze you in place or with Sprites you’ve never seen.

As much fun as Sushi Striker: The Way of Sushido is to play, I did have some trouble with both of the control schemes it offered. Using the traditional button setup and flicking the control stick between sushi works just fine, however, I would sometimes struggle to move the cursor to specific plates, the movement’s a little too sensitive. This would become more apparent when the lanes pick up speed and the action more frantic. While you’d think using the touch screen would then be the best choice it, too, isn’t perfect, my hand covering up a good chunk of the screen and therefore hiding the plates. While I certainly got used to playing with both methods, it definitely seems that the game is best suited for Nintendo 3DS with its touch screen and small stylus combo. 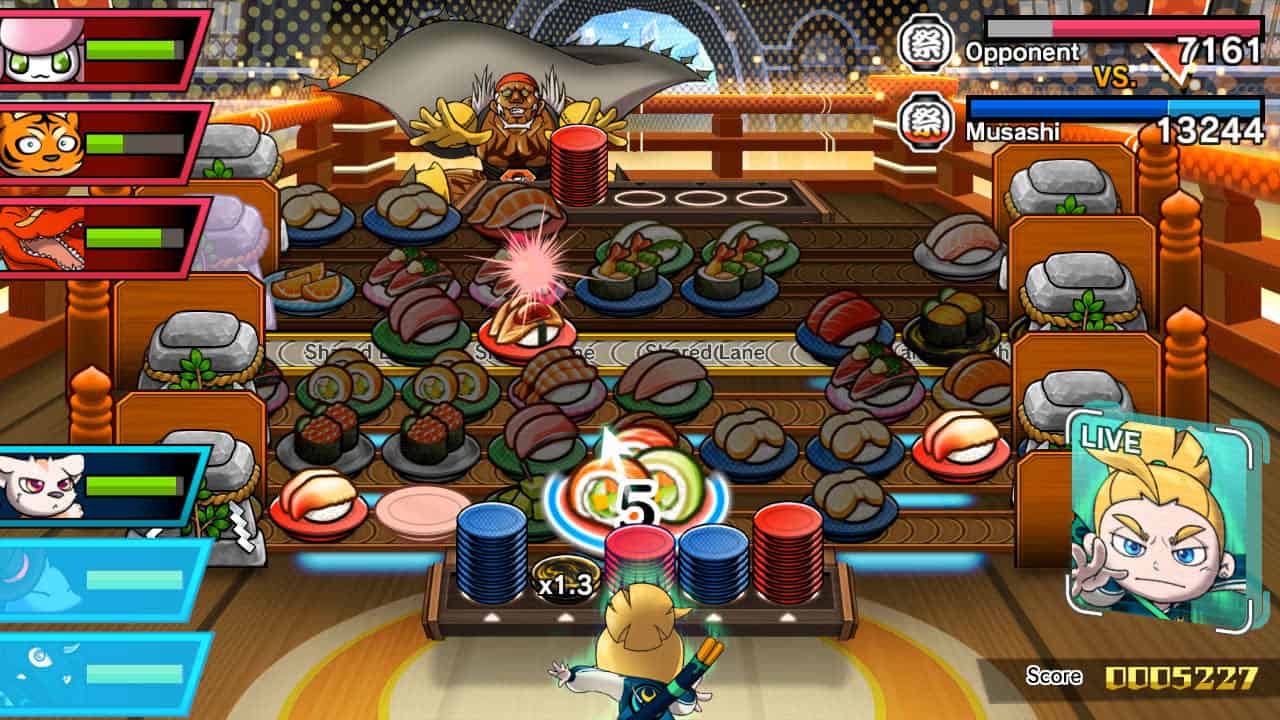 The game also includes a multiplayer mode both online and local where the participants can choose between a standard vanilla matchup or a more chaotic one including weapon capsules. Online support is always appreciated in any puzzler and, hopefully, the game can maintain a healthy pool of players going forward. Being able to play on a single Switch in Split-Battle is an unexpected surprise though but it’s also one that comes with a few costs. For one, somebody must play in the less desirable top position, an annoyance but not game ruining. Players are also limited to using the exact same Sushi Sprite team, an odd decision especially as it would allow for more tactical play. Also included is the ability to play locally across two systems.

Sushi Striker: The Way of Sushido is absolutely bursting with personality, its presentation top notch. The visuals are bold, bright and colourful with characters a mix of funny, zany and cute (especially in the case of some of the Sushi Sprite designs). Between battle, conversations, while often showcasing meaningless, sometimes even dull banter between the game’s lead and the next opponent, at least try to add a little more substance to what is essentially a series of one-on-one fights. Sprinkled throughout your adventure though you’ll find the odd anime-style cutscene and these are much more fun to watch. Another highlight occurs before you even get to the title screen, the game treating you to a wonderfully weird music video complete with smile raising theme song.

Puzzle games might not exactly be in short supply on the Nintendo Switch at the moment but Sushi Striker: The Way of Sushido is an easy recommendation thanks to its fun and unique premise and quirky, polished presentation. Control and local multiplayer grumbles aside, Nintendo’s latest takes you on a deliciously entertaining adventure that will keep you coming back time and time again. Eating sushi has never been so exciting.