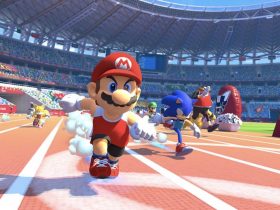 2K Games has announced that WWE 2K18 will release on Nintendo Switch this week, in news that will surprise many after they had been left wondering exactly when they could step into the ring.

The publisher has announced that the game will become available worldwide in physical and digital formats starting on Wednesday 6th December, although such date will be different for each region.

Those that pre-order a physical copy will receive two playable versions of WWE Hall of Famer Kurt Angle: his WWE “American Hero” persona (2001) and his ECW “Wrestling Machine” persona (2006), whereas those that choose to buy a digital copy can download the Kurt Angle pack for free until Wednesday 13th December.

WWE 2K18 on Nintendo Switch is promised to be “a robust offering,” and has all the main modes, the new grapple carry system, new weight detection, thousands of new animations, a massive backstage area, and up to six characters on-screen at once.

And, whether you are playing at home on your TV or in Handheld mode, up to four people can join in online or local multiplayer.