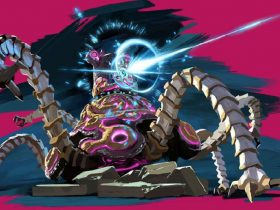 Guardian Takes On Molduga In The Legend Of Zelda: Breath Of The Wild

Super Rare Games has teamed up with WeirdBeard to produce a physical release for Tricky Towers: Collector’s Edition on Nintendo Switch.

With only 4,000 copies to be made available worldwide, pre-orders for the Tricky Towers: Collector’s Edition (£32.40) will open on Thursday 28th May.

Easy to get into but soon become a competitive spectacle, in Tricky Towers you play as a wizard that must stack your summoned blocks to create a tower and use magic to stabilise it.

Your challenge is a simple one: to create the tallest stable tower. However, jealous rivals will do their best to knock your tower over with nefarious dark spells that you must block to protect it while flinging your own spells back in their direction.

While there’s the chance to practice with single-player score challenges and 50 wizard trials, the experience comes alive in local and online multiplayer for up to four players – with three modes in Survival, Race and Puzzle.

Tricky Towers is now available on the Nintendo eShop for Nintendo Switch worldwide.