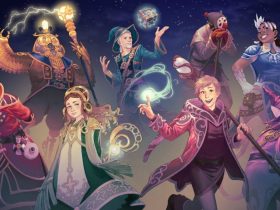 Super Rare Games has teamed up with Vertex Pop to produce a physical release for Graceful Explosion Machine on Nintendo Switch.

With only 4,000 copies to be made available worldwide, pre-orders for Graceful Explosion Machine (£30) will open at 6pm BST on Thursday 18th June.

This will include a full-colour manual, interior artwork, exclusive sticker and three trading cards randomly selected from the five-card set.

Graceful Explosion Machine’s name refers to the advanced fighter that players will pilot, in which they will blast swarms of crystalline enemies with what the developer describes as a “ludicrously overpowered quad-weapon array.”

With the player lost in deep space, you will need to shoot, dash and combo your way through “jewel-hued alien worlds” as you fight your way home – using either a Blaster, Energy Sword, Sniper Beam or Missiles.

There are more than 30 levels across four worlds, and players can aim to rack up their highest score in Score Attack mode by perfecting the in-game combo system.