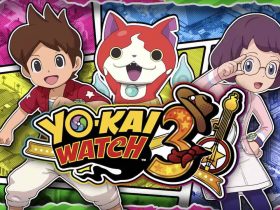 AiAi and friends are back, as they headline the Nintendo 3DS launch line-up with the promise of more monkey magic in the form of Super Monkey Ball 3D. Making use of not only the glasses-free stereoscopic 3D capabilities of the handheld but also offering tilt controls by supporting the internal gyrosensor, have SEGA delivered a worthy addition to the series or will it leave you craving for more bananas?

Super Monkey Ball 3D divides itself into three differing game modes: Monkey Ball, Monkey Race and Monkey Fight. The former is where you’ll spend most of your time, as you guide one of four characters – AiAi, MeeMee, Baby or GonGon, who each find themselves housed in a transparent ball – around a number of challenging levels, simply by controlling which way it is tilted.

There are eight worlds in total, with seven serving as the core content and the eighth being offered as a completion bonus. A cute pop-up storybook sequence greets you upon entering each before you are tasked with tilting your way across ten levels per world. The individual worlds all have their own themes, one adorned with dragons and Chinese lanterns whereas another features massive robots and mechanical arms. Such design provides a continually varied visual experience, that is further enhanced by the use of stereoscopic 3D to add depth. 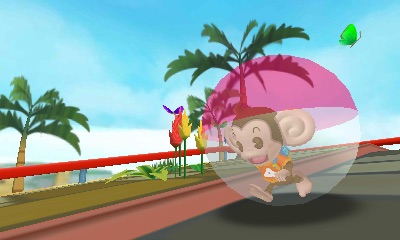 You’ll find bananas strewn throughout levels to allow you to aim to rack up a high score, alongside collectable items that don’t really offer many purposes. If you’re ever overly impressed in your tilting and banana collecting skills, you are also able to save replays for later viewing – handy for those boastful moments where there’s no one around to show your record times.

The 3D effect largely works incredibly well, yet those opting to use the gyrosensor control to tilt will have to enjoy a 3D-less experience. With the player continually tilting the handheld, your eyes will be unable to steadily focus on the screen and due to this, it won’t be able to perform its 3D magic. Therefore I’m sure the majority will opt for Circle Pad control, which in itself is more consistent to use, to enjoy the visual feast.

Whilst earlier levels won’t pose much of a challenge, as you progress you’ll begin to notice the difficulty continue to rack up. However, in places, this is more due to cheap deaths caused by a rather inconsistent camera that may soon become the bane of your life as you plummet through holes in the level hidden from your fixed viewpoint. The camera angle serves well to maintain a position directly behind you, but the inability to manipulate it to make yourself aware of the dangers that lie ahead may cause some grievance. The Super Monkey Ball series clearly rewards patience and perseverance in some instances, yet it’ll deeply frustrate in places. 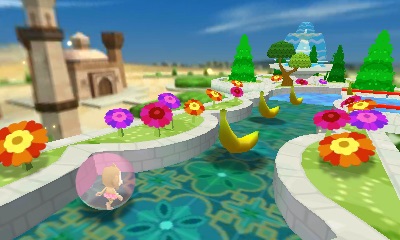 Once you’ve completed each world there is little replay value, aside from completionists who will want to search out all collectables and top every high scoreboard. A blinding missed opportunity here is the lack of online leaderboard functionality, or at least the chance to out-do high scores set by those on your Friend List.

Thankfully, beyond this Super Monkey Ball 3D offers both Monkey Race and Monkey Fight, able to be played with three A.I. opponents or via local wireless connection with up to three friends. Variety is the spice of life, and Monkey Race provides three individual modes: Grand Prix, where you race through a series of three tracks whilst earning points dependant on where you place, Quick Race and Time Trial. There are three series available, each consisting of three tracks. You’ll be able to use moves such as Drift and Spin & Dash to get ahead of the pack, with items also serving to aid you. It all feels similar to Mario Kart, yet some of the items are particularly noteworthy for their design – a favourite being the 3D Glasses, that allows you to obscure the view of one of your opponents temporarily!

Whereas Monkey Race isn’t too dissimilar to Mario Kart, Monkey Fight echoes the Super Smash Bros. series. You can choose to fight either a Quick Match or a Series, where you select a rule such as the monkey with the most bananas wins and battle through three matches. Granted the use of giant boxing gloves, you’ll have to use combos and grabs to nab bananas from your opponents in an effort to claim victory at the conclusion of the match. 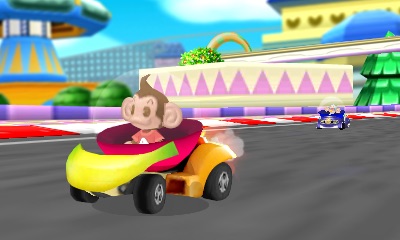 There is an undeniable level of fun provided here. There just isn’t enough of it. With an average current retail price of £34.99, you’d expect to be getting far more content than that on offer – easily being able to be blasted through in just under two to three hours.

Both Monkey Race and Monkey Fight, whilst beneficial additions to the game, fail to elongate it sufficiently, although offering an enjoyable variant from the core formula. Yet even for Super Monkey Ball devotees, Super Monkey Ball 3D marks an uninspired debut for the series on the Nintendo 3DS.