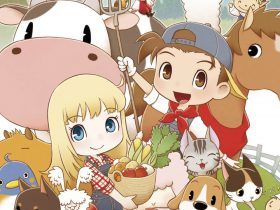 As revealed earlier this month, this has introduced support for the Toy-Con VR Goggles from the Nintendo Labo Toy-Con 04: VR Kit.

The bonus experience that it introduces will challenge you to collect musical notes, coins, and instruments hidden in three stages based in Bonneton (Cap Kingdom), Bubblaine (Seaside Kingdom), and Mount Volbono (Luncheon Kingdom).