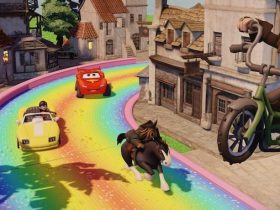 Sumo Digital producer Joe Neate has hinted that Sonic & SEGA All-Stars Racing Transformed could be headed to Wii U.

Previously announced yesterday for Nintendo 3DS, the sequel sees characters now in the seat of vehicles capable of transforming between cars, planes and boats, as Sonic and the cast of SEGA All-Stars compete across land, air and water.

“I couldn’t possibly tell you [laughs],” Neate explained in an interview with Metro, queried as to whether the game could also be arriving on Wii U.

“I… couldn’t possibly tell you [laughs],” he reiterated when pushed further. “But I agree with you, wouldn’t it be a great idea to get this onto a platform like the Wii U!”