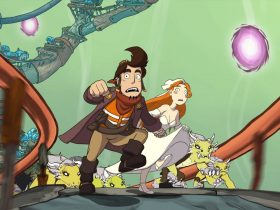 In this action-adventure game, you will forge your weapon and follow the path of the Jedi. As a new student keen to learn the ways of the Force from Jedi Master Luke Skywalker, you will have the chance to interact with iconic Star Wars characters in classic locations.

After customizing your character’s look and gender, you will enter the Academy, construct your own Lightsaber from handle to blade, and, working to complete missions, will be faced with the ultimate choice: to fight for good and freedom on the light side or follow the path of power and evil to the dark side.

The Nintendo Switch port will have support for optional motion control, and the “much-celebrated” online multiplayer battles will return – with six modes such as the team-based siege mode and two-on-one power duel.