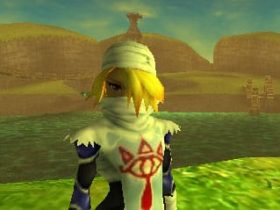 Latest screenshots for The Legend of Zelda: Ocarina of Time 3D continue to impress

Square Enix have teased their latest project, slating it for a Summer 2012 release in Japan.

The launch of a teaser website states “Secret Title 2012 Summer, “C” is coming”, accompanied by a trailer that provides a number of hints. An accompanying countdown timer also points toward a July date.

It lists keywords including ‘Crystal’ and ‘Summons’, with which ‘Odin’, ‘Titan’ and ‘Diablos’ are mentioned. Alongside this, credited illustrations by Masaki Hirooka and Yusuke Naora are shown.

Hirooka is most well-known for his work on Nintendo DS title Castlevania: Order of Ecclesia, whereas Naora has worked extensively on the Final Fantasy series, most notably as Art Director on Final Fantasy VII, VIII, X and Type-0.

You can view the teaser trailer below: