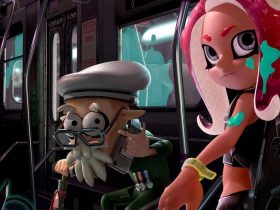 Play As An Octoling In The Splatoon 2 Octo Expansion

You play as Carl, a state-installed manager of an apartment building who must spy on his tenants. That job requires that you report anyone that may be plotting subversion against the tyrannical state, meaning that you must eavesdrop, place wiretaps or cameras and search apartments to identify them.

With procedurally generated scenarios and more than 20 different endings to discover, the Beholder: Complete Edition comes with the Blissful Sleep downloadable content.

“Mixing management and spying mechanics with a choice-driven narrative, Beholder: Complete Edition is an amazing addition to Curve’s catalogue,” explains Curve Digital publishing director, Simon Byron. “It’s a darkly comic look at an authoritarian future, featuring beautiful visuals and a touching story. We hope Nintendo Switch owners love the game as much as we do.”

Alawar Premium producer Evgeny Sister adds: “Inspired heavily by George Orwell, Aldous Huxley and Ray Bradbury, Beholder: Complete Edition, challenges issues of morality. If you are given the power to destroy privacy, do you follow orders or treat those with compassion?”