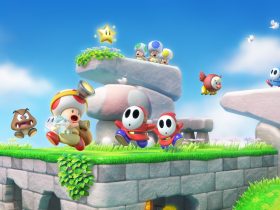 Nintendo has released a minor software update for Splatoon 2, that sees the ink-based shooter now sat on version 1.4.1.

This addresses multiple issues where players using Brella weapons could still shoot while their weapons remained open, when players could store a charged shot indefinitely with the Goo Tuber, and players being able to pass through the squid barrier on Snapper Canal.

Changes Made In Splatoon 2 Update Version 1.4.1