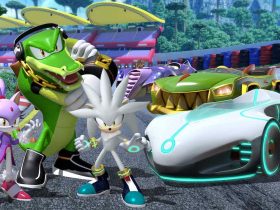 SEGA has released the third Sonic Mania Adventures episode, their five short animations that welcome you back to Angel Island.

The story continues with Knuckles the Echidna on his quest to guard the Master Emerald on Angel Island. Ever since Dr. Eggman and Sonic first appeared on the island, trouble has followed.

Fearing the worst, Knuckles has been watching over the Emerald constantly to ensure that nobody – robot or hedgehog – gets their hands on it. Just as Knuckles finds a safe location, a mysterious figure appears in the shadows…

The five episodes have a connected story, and you can expect the fourth episode to release next month.

For those that are interested, the SEGA Shop has some exclusive Sonic Mania Adventures merchandise which is available to those in the Americas, Australia, and New Zealand.