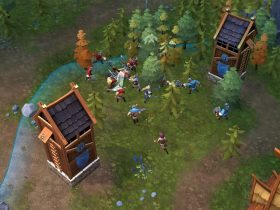 Northgard Out On Nintendo Switch This September

Upon turning the game on for the first time, Smoke and Sacrifice immediately reminded me of a title that, once upon a time, I could not get enough of. That title being Don’t Starve, and it’s easy to see why it would remind me of that game. A quick glance and one could easily be mistaken for the other. It is also a genre that has prospered greatly in the past few years. Although it’s hard to pinpoint why they weren’t really that prominent more than 10 years ago, it’s not hard to see why they are becoming so popular.

For those out of the loop, survival games such as this are open world affairs that require the player to collect resources in order to build items and weapons, among other things, with the main goal being to simply stay alive. You are not able to just stick to one position as the resources you collect will soon deplete, forcing you to keep moving and to continuously find yourself in places of danger.

Keeping it specific to Smoke and Sacrifice, what you also have is a genuinely intriguing, engaging story that does a great job of keeping you hooked. The first scene in the game see’s Sachi, the central character, sacrifice her firstborn child to a tree (yes, a tree), and if that isn’t enough to make you wonder what the heck is going on, then I don’t know what will. Now, I’m not going to go too in-depth about any more of the story as it is best to experience it yourself, but it is safe to say that it wasn’t exactly her choice in sacrificing her own child, as, I’m sure, you would expect. So, in her mind, she has a motivation for going on this journey and you will see it play out. 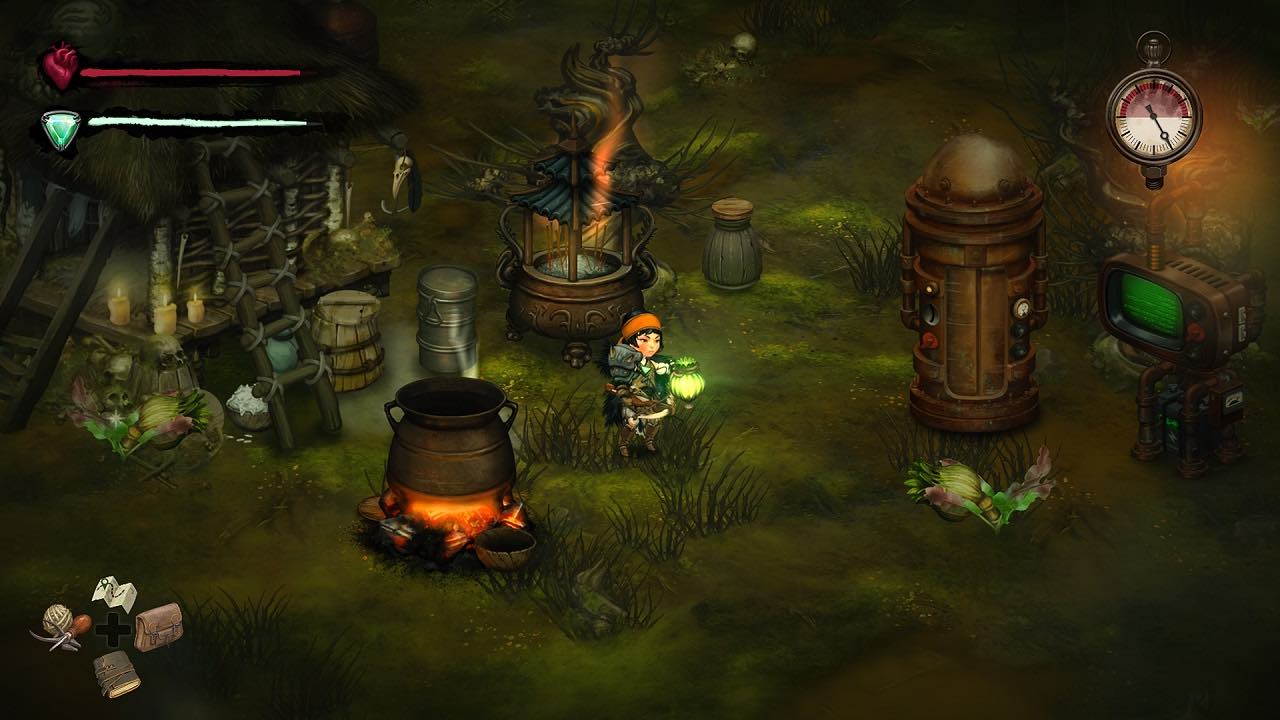 Once the cutscenes finish and you are in control, you’re eased in with a very simple but essential crafting quest, something that you will be doing a lot of during your time with the game. You’re then taught how to protect yourself from the darkness, again, another essential tutorial that you must know if you are to survive. It then slowly introduces all the other basic tutorials without making it boring. So, you will learn about crafting weapons, tools and how they will deteriorate the more you use them and making the most of your food, so you don’t starve (there’s that name again) to death as they can spoil before you even consume them, rendering them useless.

You will encounter NPC’s and signposts that will also give you recipes that you are then able to try out for yourself. They almost prompt you into wanting to wander off to find said ingredients, it’s a great way to make the player explore the world more and see what lurks in the distance. You are required to plan ahead to new areas too. For example, during your journey, you will have to traverse a snow-filled landscape, but in order to do so, you will require the correct snowy garments such as snow boots. Without such clothing, any attempt at crossing the land will result in a slow and presumably, very cold death.

You will come to learn that light is your best friend and you need to keep it local to you all the time. When darkness falls, Sachi has minimal protection for a short while, meaning that you must do something about it and do it fast. Crafting an item such as a lantern is your best bet early on, as that gives you a decently sized area of light which will certainly be of welcome. Better and more efficient items will be available to craft the later in the game you get, but to start, you must make do with what you can. 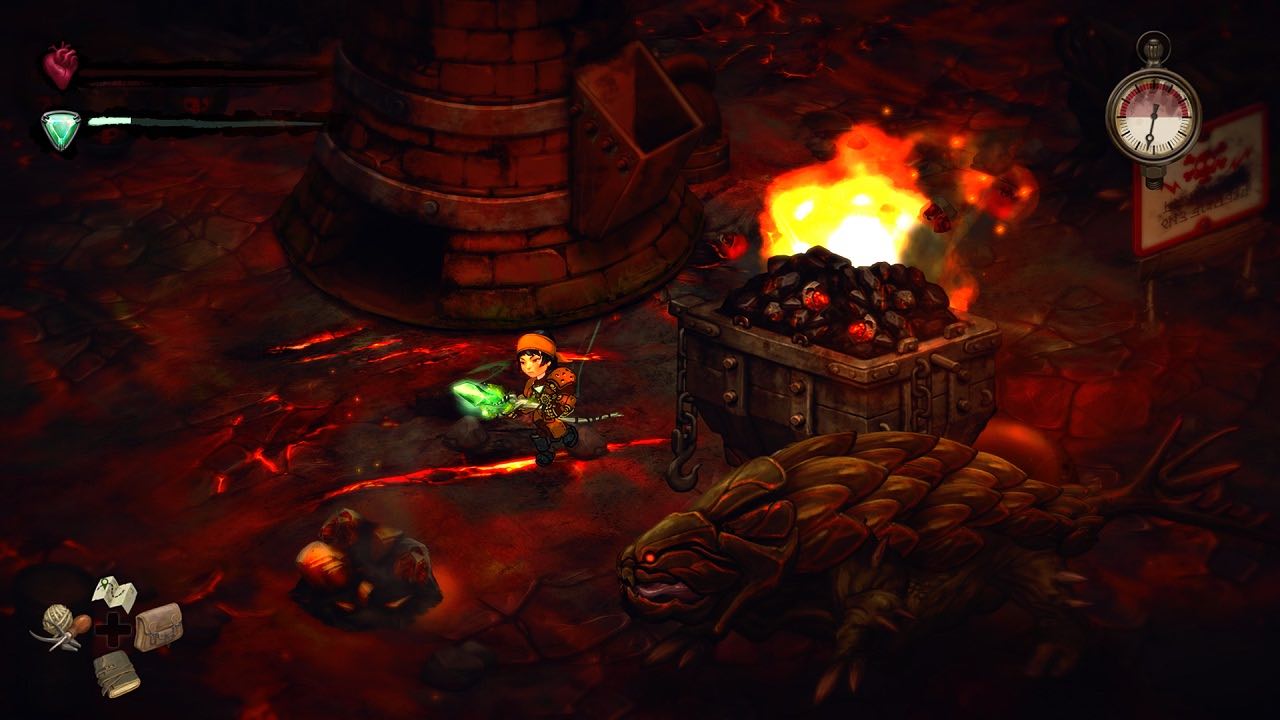 I did feel that the inventory menus in general, not just for crafting, were a little bit too awkward at times. With this being a game that requires you to manage your inventory on the fly and do it as quick as possible during dangerous sections, such as when it goes dark, that’s a bit disappointing. Especially when playing in handheld mode, I felt that it was quite difficult to pinpoint certain items that I wanted to pick. This is because you can carry more than 50 items with you at any one time, and the menu box it appears in isn’t exactly the biggest to begin with.

I did encounter a few small performance issues, none of which were particularly bad by any stretch of the imagination, but you certainly see that they are there. It can be off-putting, especially when you’re trying to battle or escape from battle. Slowdown and lag tend to happen within the areas where there are a lot of enemies and you’re engaging them. Along with that issue, there is another that I encountered that is separate and it involves when the game loads into a new area or you’re loading from a save file. When the game loads, you’re watching a black screen and the game will start at some point in the background, before a picture comes on the screen. What this means is you are vulnerable before you can do or see anything. It happened to me a couple of times where I would already find myself being pummelled by an enemy before I even know what’s going on. I wasn’t sure if it was because I saved it at the wrong moment but after the second time it happened, whenever I did save, I made sure that no monsters were around first, and I never encountered that problem again.

Smoke and Sacrifice is yet another worthy entry in the survival genre. While it isn’t the best one, it certainly has a lot going for it and is a still a cracking little title. It has an impressive overarching story which is rare in the genre. Finding new things to make and gathering items is incredibly fun and addictive. The combat system will be a little simple for some and it does have its share of problems, such as an overly finicky inventory menu. But if you are able to see past this you will find a title which has plenty to offer and plenty to enjoy.