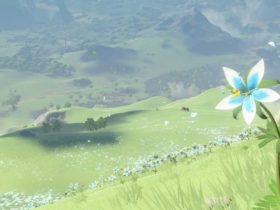 Watch The Secret Ending In The Legend Of Zelda: Breath Of The Wild

I was really enjoying Sling Ming for the first couple of hours. It struck me as a very smart puzzle game which was doing something very unique. The opening of the game allowed me to choose between touch controls and buttons – which is refreshing – I opted for the latter as I generally dislike touch screen controls on most games. The story was silly, but totally aware of the fact which allowed for some bonkers moments in the plot, including breaking the fourth wall and the mechanics, which I’ll come to, are incredibly smart. But then I reached a level which frustrated me no end. Not because I couldn’t solve the puzzle, but because neither the button prompts, nor a switch to touch screen, would register what I wanted the game to do.

You see, Ming is a princess of a kingdom and some bad stuff is going down. She decides to fight back and protect her country by seeking out three gems that represent the good in her. It’s not all that important to be honest. Sling Ming features the kind of plot points thrown together from a bag of video game tropes, which is no bad thing, but don’t expect anything to blow the doors off the house. There is some lovely dialogue throughout – Ming is sassy and cheeky, which allows a vein of humour to be explored often.

Ming heads off into the depths of her castle or palace and finds a transportation system which once doubled as a way to feed clean air to the city above. In order for Ming to move, the player must select or tap nodes along the pipeline pathway shifting Ming along via a cable attached to her back. She sort of bobs about like a cork in water as she dangles, but can be kept still with a tap of the A Button. Ultimately, the goal is to make it to the end of each level, allowing her to get one step closer the to the gem she needs. Oh, and this all takes place after she has flown into space to find the transport system on seemingly deserted planets. 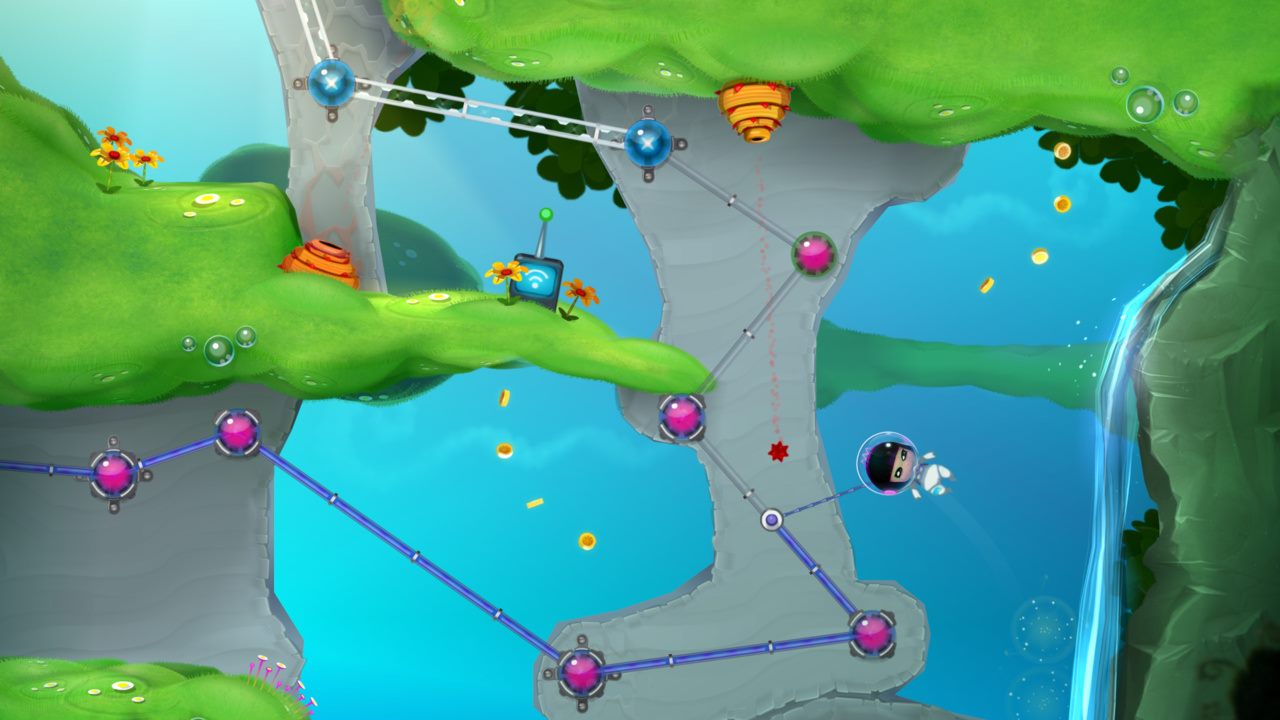 It’s not a straightforward idea of pressing nodes throughout, however. Some nodes need to be moved manually to new areas so that Ming can traverse the screen. She can collect items to throw at buttons, which trigger machinery or death-laden traps and the key through all of this is physics and momentum.

And this is where the name Sling Ming comes in. There will be times when shifting Ming back and forth along a pipeline will create momentum for her to loop through the air or swing out around ledges or dead ends. Situations often arise where nodes must be selected swiftly launching Ming through the air like some kind of awkward bungee jump. A power-up soon gives her the ability to grab onto handles and you’ll be juggling button presses or taps to throw her, grab a handle which will weigh her down, throw her again, dodge some lava and exit the level.

This kind of quick reaction gameplay starts to show the flaws of the game. Taps on the screen can work a little better than buttons, but that doesn’t help when playing on a TV. The idea of slinging Ming around is great, but it’s often let down by either a combination of button presses or wonky physics which force you to restart a section when she inevitably dies. 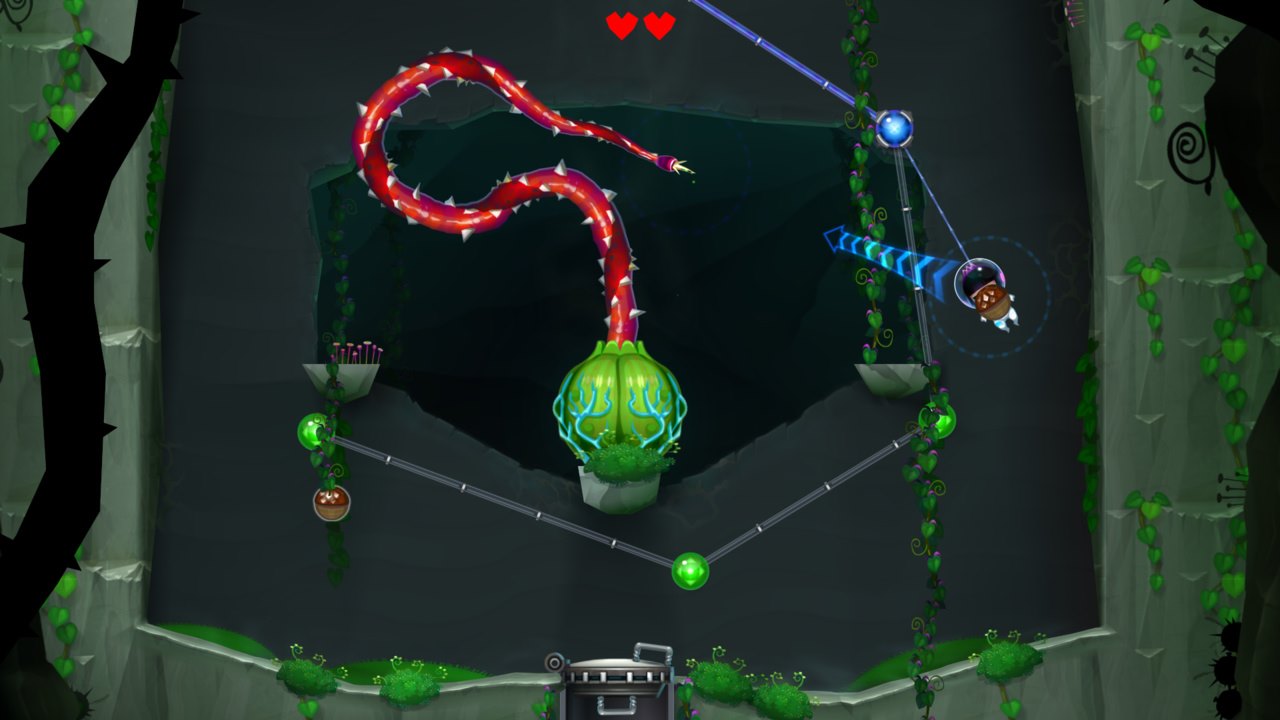 Thankfully, scattered throughout each level are coins which can be used to skip levels if they prove tricky. I’d promised myself not to use any, but that troublesome level mentioned previously had me dipping into my savings. I felt a little robbed, to be honest. An addition to the game was a magnet system that required extra button presses to link together the pipelines and for some reason they would never click into place. No matter what I tried, those magnets wouldn’t behave and the flaws in the system became more glaring.

“Itoms” open doors to new areas and, oddly, boss fights. The puzzle game soon adds the idea of Ming fighting a boss, even though up to now the enemies have been largely passive – touching them kills Ming, but that’s all. Now you have to move nodes around the areas, while keeping an eye on the boss movement, often dying in order to have a little extra time to move the nodes to a new place on the next go around. It’s baggage the game really doesn’t need and the inclusion of something that relies on precision movement with a clumsy transport system designed primarily for puzzles, is a massive hole in an otherwise clever premise. Small frustrations in her physics soon build up and the game becomes a slog rather than a joy.