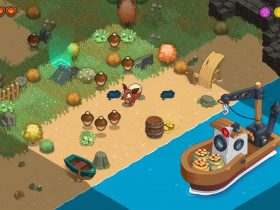 Plug In Digital and Hollow Tree Games have announced that Shape of the World will release on Nintendo Switch next month.

The first-person exploration game promises players a relaxing and interactive escape will let you freely get lost, with your presence in the forest becoming the driving force behind the procedurally populated environment – leaving you to wander through dream-like forests, aquatic caves and peaceful shores.

“I’m thrilled to officially announce that Shape of the World is coming to multiple platforms this June,” shares Hollow Tree Game founder, Stu Maxwell. “After four years of developing the game in my own time after work, it’s exciting to see my project finally hitting the (digital) shelves.”

Shape of the World will release on the Nintendo eShop for Nintendo Switch worldwide on June 6th.