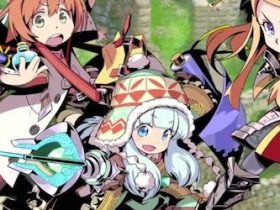 Etrian Odyssey and Mystery Dungeon announced as a 3DS exclusive

Haunted by a nightmare ever since she became human, we rejoin WayForward’s hair-whipping Shantae as Scuttle Town finds itself besieged once again. It is Ammo Baron’s Ammonian Army that is soon revealed to be behind the invasion, although Mayor Scuttlebutt explains that he sold the town to the cycloptic villain in a moment of desperate weakness – spending the money on cheap waxy chocolates.

Already looking to flatten his newfound investment to make space for more cannons, Shantae, as the town’s guardian genie, steps in to quote the Fairness towards Oversized Chocoholic Landowners Act at the town’s invader. This rather leniently allows the payment to be refunded within 30 days before Ammo Baron can claim legal occupancy, although this only aggravates him to attack you. 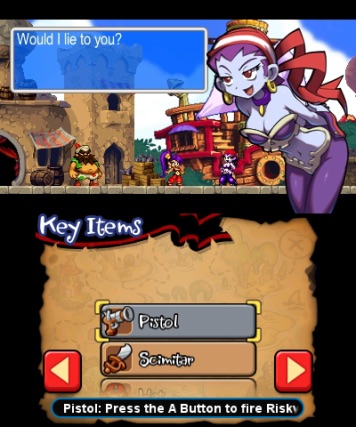 It’s an easy win for Shantae, but comes at a cost when Sequin Land Sultana’s royal guards revoke her status as town guardian for assaulting Scuttle Town’s now rightful owner. The situation only worsens when Risky Boots turns up unannounced, accusing Shantae of stealing her weapons and crew. With Shantae dragged to her Uncle’s workshop to explain why they have one of Risky’s minions trapped, dark magic suddenly turns the lone Tinkerbat into a ferocious Cacklebat that Shantae quickly whips out of the air.

Trapping the dark magic within Risky’s magic lamp, she shares her fear that the Pirate Master has returned to Sequin Land – the greatest threat that it has ever known. It took every last genie to defeat him when he last cast a dark shadow across the land, but if they can cut the dark magic off at its source then they can hopefully keep him trapped in his grave. 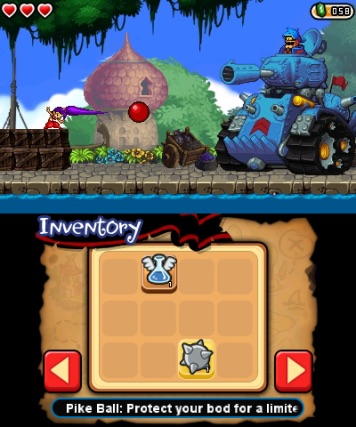 And so begins your adventure, warily partnering with your old nemesis as you tour the neighbouring islands in the Forbidden Waters – with delightful names such as Saliva Island and Mudbog Island – to neutralise each Den of Evil.

Now deprived of her genie powers, Shantae instead relies on uncovering Risky’s Pirate Gear to gain a tactical advantage in the situations and enemies that she’ll face. Whether that be the Flintlock Pistol that lets you attack from afar and blast distant switches, gliding around with the Pirate Hat, slashing foes with the Scimitar, or blistering your way through stages with Risky’s Boots. Perhaps not as mischievous as Shantae’s animal transformation belly-dancing spells, these at least diversify your approach and freshen the series for those that have adventured through the half-genie heroine’s previous outings.

Take Shantae on a shopping spree, and gems that you gather on your continual quest may be used to buy weapon upgrades and expendable items. Hair Products will strengthen her whiptastic locks, whereas the Bubble Shield and Pike Ball will temporarily help protect you from surrounding enemies. Whereas Heart Squids hidden throughout each island can be taken to the Squidsmith, with four being required to forge a new Heart Holder to extend Shantae’s health. Your inventory and assorted collection can be easily tracked through the touch screen, as well as the area map, letting you access and use items as necessary. 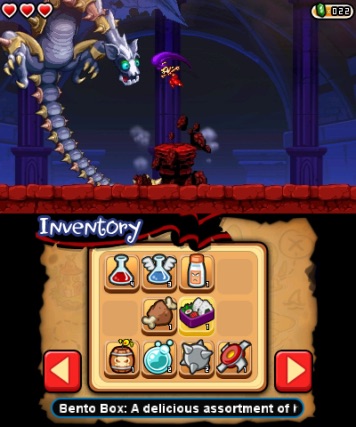 Witty script aside, by now we’ve become accustomed to WayForward’s delectable pixel art direction and energetic soundscapes, and Shantae and the Pirate’s Curse is unsurprisingly no different. Everything looks resplendent on the Nintendo 3DS, excelling even further with the visual depth that they masterfully provide through the stereoscopic 3D effect. Whereas Jake Kaufman’s soundtrack is the perfect accompaniment to Shantae’s adventure, fusing Arabian and pirate-styled melodies and pounding beats into an audibly sensational treat for your unsuspecting eardrums.

That Shantae and the Pirate’s Curse still relies on players having to manually save their progress is my only frustration, even if I can in part appreciate the unforgiving experience that it looks to deliver. Even an autosave, or checkpoint, whenever you change islands would have been enough, helping many to avoid the potentially countless hours lost after being caught out by WayForward’s otherwise welcome challenge.

But in WayForward we trust, and with Shantae and the Pirate’s Curse they enviably conjure yet another adventure that I never wanted to end. Retaining the impeccable attention to detail and platforming nuance that we’ve come to expect from the Californian outfit, Shantae’s latest is a shiny Nintendo eShop gem worthy of any collection. And the latest must-own digital release to colourfully belly-dance its way into view.