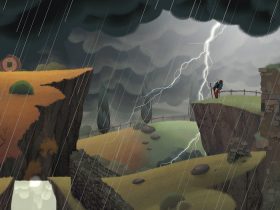 When it comes to puzzle games Tetris is and has always been my go-to. It’s warm and familiar but no matter how many different variations of the game I’ve played (it’s a lot) or how many rounds I’ve sunk my time into (it’s also a lot) I always find myself returning for more whether it’s a quick round during my lunch break or completely losing myself for hours at a time, as I did with the amazing Tetris Effect. In fact, it was through this series I found myself introduced to a whole new puzzler series – Puyo Puyo.

Ever since getting my first taste in the excellent Puyo Puyo Tetris, I’ve been keen to venture onto other entries in the blob-matching series both past and present. While I’ve been playing Tetris games all the way back to the SNES, my late discovery of Puyo Puyo left me with plenty to catch up on. Enter the next entry in the SEGA AGES – the arcade release of Puyo Puyo 2.

Puyo Puyo is all about trying to organise falling pairs of blobs (or Puyos) into groups of the same colour (this doesn’t necessarily need to be done in a straight line just so long as all they are connected horizontally or vertically in some way). Matching four or more will cause them to disappear which if positioned well can lead to other Puyos falling into new spaces and lining up to make another match creating a chain.

While you’re doing your best to colour coordinate your Puyos, an opponent – positioned on the other half of the screen – will be doing the exact same thing. Creating chains is key, each one made sending Garbage Puyo to your opponent’s side. The longer the chain, the larger the number of Puyo being sent. Fill up your opponent’s board first and you’ll take the round.

Changes made for the sequel seem small but have a big impact on the way matches play. Clearing your board entirely will award you with an ‘All Clear’ bonus and send a wealth of Puyos your opponent’s way. More impactful still though is the introduction of ‘Offsetting’, an option that allows players to counter Garbage Puyos being sent their way by making chains of their own. It can lead to some rather tense matches as the pair of you rally back and forth unwanted Puyos. Lastly, while the game does feature five different coloured Puyo you’ll only ever really see four in play at once making chains easier to create than the first Puyo Puyo.

In terms of mode selection, this arcade versions keeps things rather simple. ‘Arcade Mode’ sees you taking on random opponents one by one whilst trying to accumulate enough points to work your way up a tower. ‘Endurance Mode’ meanwhile is more of the same albeit you’ll now face off against a fixed line-up of opponents. Outside these single-player offerings is a versus mode playable both locally and online. While this version of Puyo Puyo is fairly long in the tooth at this point it’s still one of the best entries in the series out there if you’re after some good ol’ one-on-one couch competitive play. One match can easily end up turning into several and minutes quickly morph into hours. Unfortunately, I had trouble finding any online games – a problem that lines up with most of my experiences in the SEGA AGES series. So if your interest lies in being able to play others online, you may want to give this game a pass.

You’ll find the usual assortment of M2 extras included here ranging from visual options to customisable controls and tweakable gameplay options. What may be disappointing to some is the lack of full English translation. Text before battles is in Japanese for example. To be fair it’s hardly essential for a puzzle game and there is a separate menu option with descriptions of characters in English outside the actual game.

SEGA AGES Puyo Puyo 2 is an excellent puzzle game wrapped in a rather straightforward package. While it’s certainly a step above its predecessor, a lack in variety of mode types might make this one of the shorter distractions we’ve seen from the SEGA AGES collection so far.