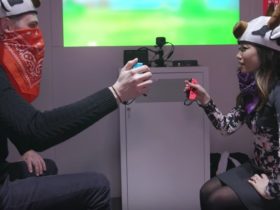 Triple Scale Games has announced that Save Your Nuts will release on Nintendo Switch this month.

This competitive multiplayer game challenges you to chase, catch, throw, and tackle your competition to secure elusive acorns, with unique characters that each has different abilities.

With support for up to eight players whether that be locally, online or against the AI, there are three different game modes to participate in: Capture the Nut, Thieves, and Battle.

In Capture the Nut, an acorn is dropped and each team has to fight over it to score. Whereas Thieves tasks you with stealing your opponent’s nuts while protecting your own, and in Battle you will want to be the last animal with your nuts intact.

“We would like to thank our Early Access community; they have really helped us with their feedback so far,” explains Triple Scale Games founder Frederic Bobohn.

“This period has been extremely constructive for us. Their suggestions and the improvements we’ve made will help us to launch on Steam with a high-quality game that we can bring to even more people on Xbox [One] and [Nintendo] Switch.”

Save Your Nuts will release on the Nintendo eShop for Nintendo Switch worldwide on 16th April 2020.