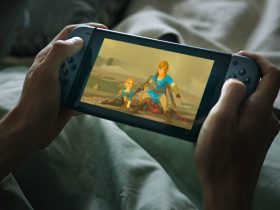 It would appear that the “surprise” Nintendo Switch game that Ubisoft has in development is not their Beyond Good & Evil reboot, but a turn-based RPG that will see the Raving Rabbids invade the Mushroom Kingdom.

Being created with the working title Mario RPG: Invasion of the Rabbids, Let’s Play Video Games report that the game is being developed under Nintendo’s watchful supervision in order to help see it hit the Nintendo Switch launch date. The company’s involvement is to also make sure that the Mushroom Kingdom characters and iconography are in keeping with the Super Mario series.

Their sources – said to be at Ubisoft and Nintendo – reveal that the game’s premise will see the Mushroom Kingdom invaded by Raving Rabbids, with a Rabbids-themed Bowser to appear as a recurring boss enemy. The Mushroom Kingdom’s iconic cast will make cameo appearances, but the core party will star minor characters – Yoshi will be a key party member, as well as a playable Rabbid.

With the game set to be placed firmly in the spotlight at January’s Nintendo Switch Presentation 2017, a playable demo has been prepared for the press to experience.

This demo will have a quicksave system to make sure that players can immediately save when the Nintendo Switch Console battery runs low, while the Joy-Con controllers will vibrate to suggest that Rabbids are jumping in and out of the screen. This concept implies that your Nintendo Switch Console is infested with Rabbids, and that they could interfere with gameplay at any point.