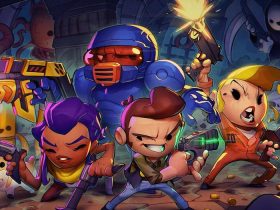 VD-DEV has announced that RISE: Race The Future will release on Nintendo Switch next week.

The French developer was behind New Nintendo 3DS exclusive IronFall Invasion, and, after teaming up with professional automotive designer Anthony Jannaraelly, have now looked to create an “unprecedented racing experience.”

This futuristic arcade rally game places you behind the wheel of next-gen racing cars that, thanks to new wheel technology, let the player ‘precision drift’ on all types of terrain – even water.

With vehicle dynamics based on realistic physics, you can race in 10 different cars in 64 Challenge races with multiple goals, eight Championships (64 races), or in Time Attack against ghosts.

RISE: Race The Future will release on the Nintendo eShop for Nintendo Switch worldwide on July 22nd, priced at £16 ($16.49).