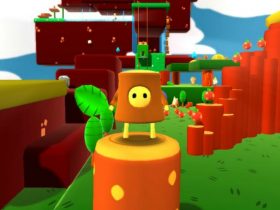 Save The World In Woodle Tree Adventures Deluxe On Nintendo Switch

Call it a rose-tinted opinion, but in the early-to-mid noughties, there seemed to be a hell of a lot of racing games out there that was just pure, silly fun. Not every racing game was trying to recreate real-life cars with meticulous detail or attempting to make each vehicle handle like the real thing. It feels like for a long time we’ve been missing the truly bonkers, over-the-top racer. One that defies the laws of physics. That picks up the physics textbook and shreds it with one hand while dancing to loud, European techno music.

I remember fondly games like Hydro Thunder, where you raced over-powered speedboats over waterfalls. Or TrickStyle, set in a future where hoverboards exist and are raced because, it’s the future, man! Riptide GP: Renegade feels like it came about in a time long gone, where Tony Blair was a nice guy and Donald Trump was that bloke with funny hair off the telly.

Riptide GP: Renegade is a pure, arcade racer. You drive super-powered jet-skis called hydrojets in illegal street (well, canal) races across different various futuristic locations. Ride over a ramp or jump after a wave and you can perform tricks that will fill up your boost bar. Get to the front of the pack and you’ll have to jostle with the cops who, for some reason, seem to have invested in the fasted hydrojets in the world. 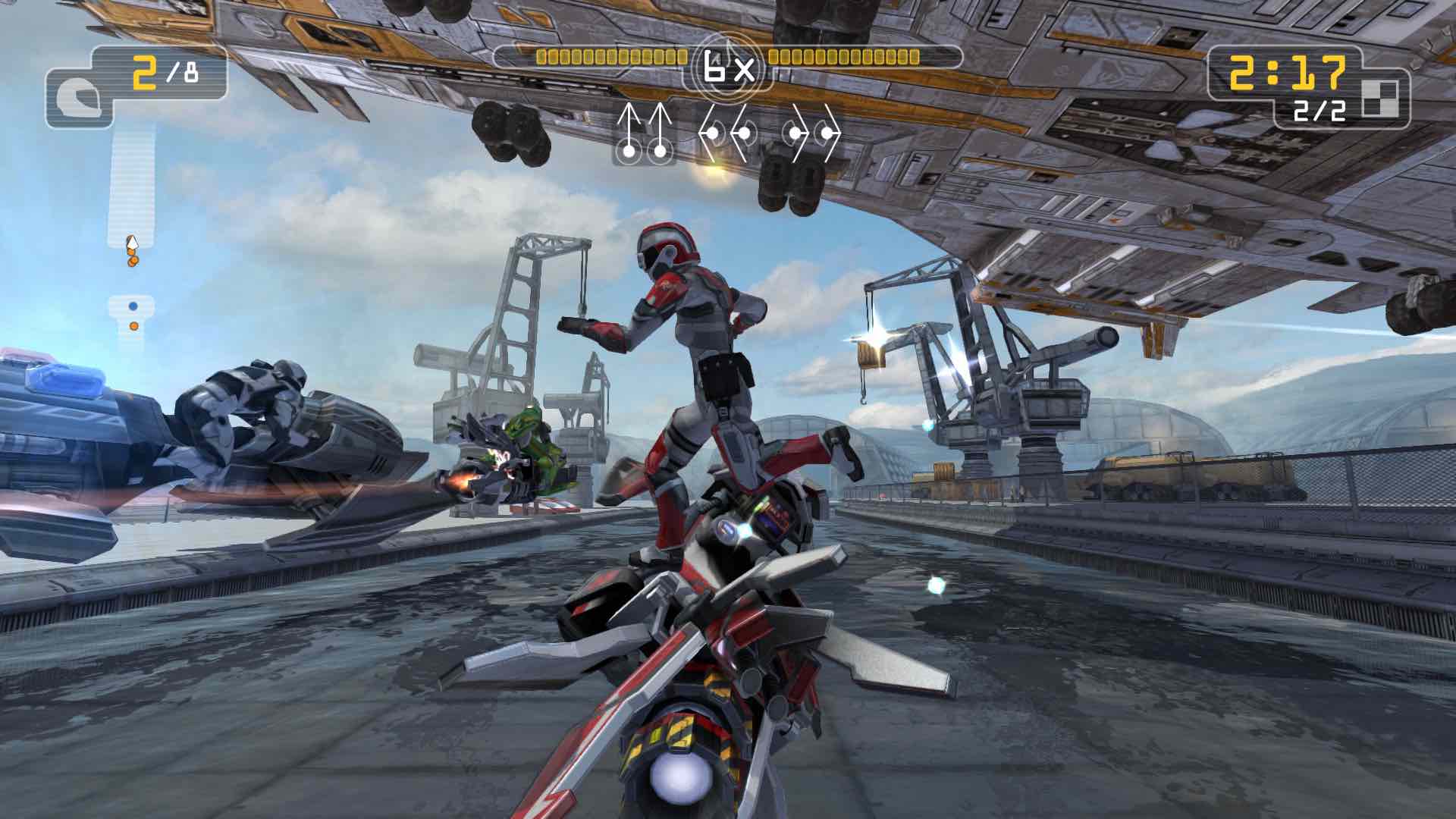 Races are fast and the courses are a real blast to whip around. Riptide GP: Renegade hits the perfect balance of being challenging, where each race feels competitive, but also winnable. There are no items like rockets or shells to hinder your competitors progress. The only way to get an edge on the opponent is boosting after mid-air tricks. Pull off a well-timed Superman trick and you’ll yell ‘Radical!’ so loud it’ll flip your baseball cap around backwards.

There’s a lengthy Campaign mode to make your way through. You’ll start with just one racer and hydrojet unlocked. As you progress through the courses you’ll be able to earn new tricks to perform, tweak your jet and unlock perks using your earned cash and XP. It adds a little more depth to the Campaign, and earning cash and XP after losing a race by a whisker softens the blow a tad. You can also change the colours of your jet and select a number and logo – a nice little feature which gives the game a touch more personality.

Courses get more difficult as the Campaign progresses, but being able to improve your hydrojet means they’re never insurmountable. You’re not just racing, too. There are several different types of challenge to play: Slalom; Head-to-head; Freestyle, where you need to perform enough tricks to score points; Grand Prix and Elimination. If you’re looking for an extra challenge after defeating a stage there are optional bonus stages that are pretty tricky, too. 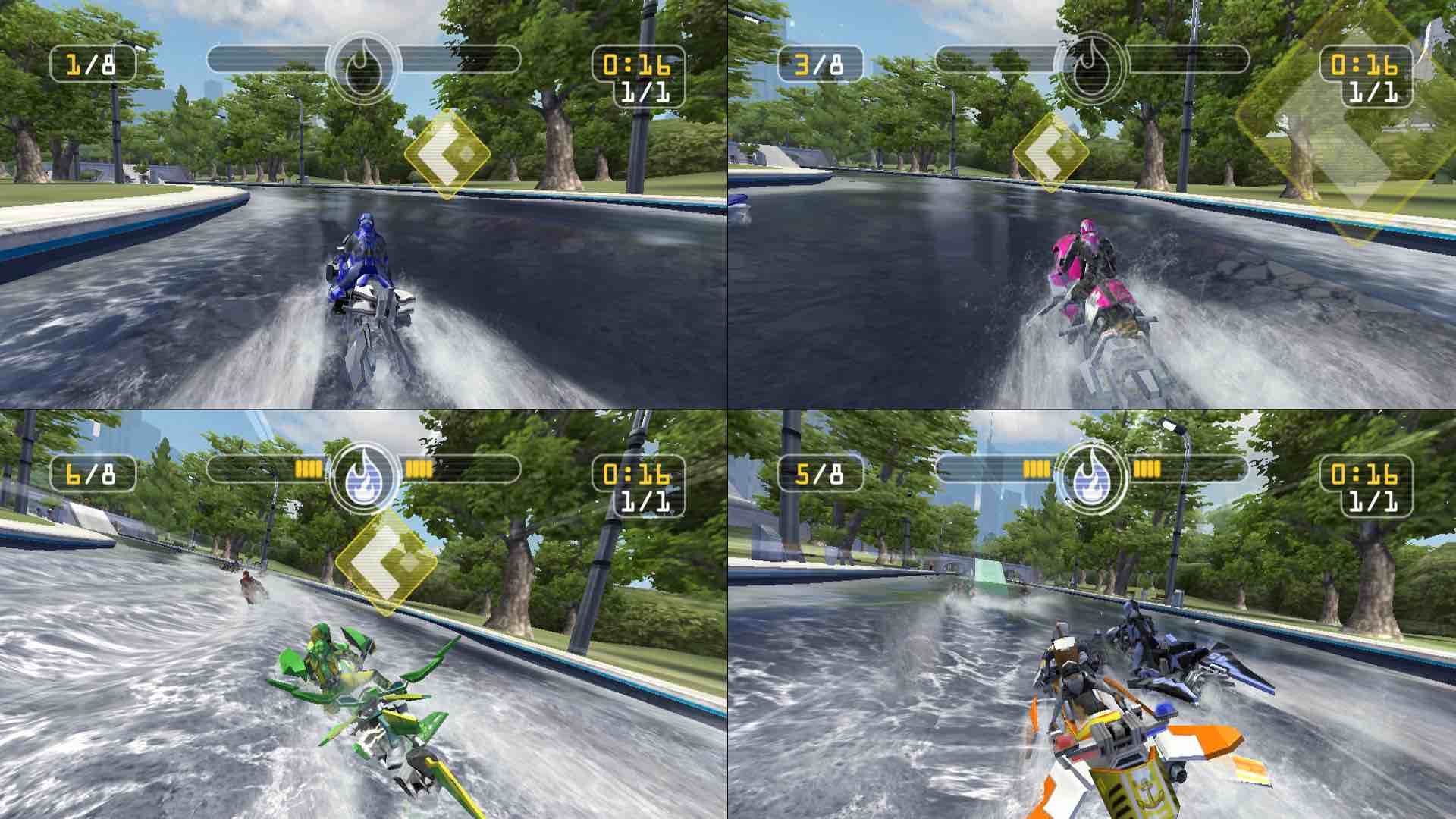 There are a decent number of courses on offer. However, you will feel like you’ve played the same ones a few too many times, as they’re all set in the same handful of locations. Tracks aren’t just standard ponds, however. Some have some bombastic set-pieces, such as submarines and ships exploding as you dart in-between them. These would be more impressive if the game looked a little more polished. Graphically the game also seems a little stuck in the naughties, and it wouldn’t be winning any awards for looks then, either. This is possibly due to its tablet-game origins, as it just doesn’t feel like it’s using the full potential of the Switch.

There’s the odd nice rain effect on the screen, but despite the fact the whole game is racing over water, the water doesn’t look particularly good, and it certainly doesn’t follow any law of physics (water cannot flow upwards, Riptide GP: Renegade).

But this game is silly fun, and fun you’ll have. It certainly doesn’t lose out anything in multiplayer. Split two Joy-Con and you’ll get a more simple control-scheme with automatic acceleration and simple trick input. It performs great in multiplayer docked or portable. Obviously, the big screen will emphasise more of the graphical blemishes, but you’ll be too busy performing sick tricks to care. Bring your wetsuit and get ready for a wild ride. Cowabunga dude!

Simon Burr
View More Posts
A lifelong lover of all things Nintendo, Simon has worked on various popular gaming magazines. So enamoured with video games as a child, he used to make his own consoles out of cardboard. He invented the wireless controller long before the Wii when he ran out of string for the wires. He goes unaccredited to this day. Find him tweeting: @pennilessarcade