Capcom has revealed plans to release the Resident Evil Triple Pack for Nintendo Switch at retail in North America.

Resident Evil 4
In the wake of the completely unprecedented biological disaster of Raccoon City, the corporation exposed as the initiator of those atrocities, Umbrella, has been dissolved. Leon S. Kennedy, a survivor of the incident, has gone on to become a special agent in the direct employ of the president of the United States. The president’s daughter has been kidnapped, and Leon has followed eyewitness reports to a cold village in Europe. In that village, a new intrigue awaits…

Resident Evil 5
While the Umbrella Corporation and its crop of lethal viruses have been destroyed and contained, a more dangerous threat has emerged. Somewhere in Africa, innocent villagers are transforming into aggressive and disturbing creatures.

Featuring online and couch co-op, players can experience this Resident Evil classic as either Chris Redfield or his partner, Sheva Alomar, as the duo work together to investigate and stop those responsible for the viral outbreak. The game is scheduled to launch this fall.

Resident Evil Triple Pack will release at retail for Nintendo Switch across North America on October 29th priced at $59.99. 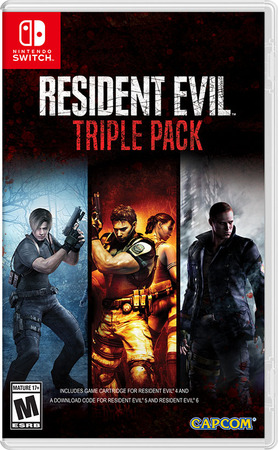