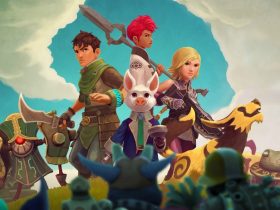 Explore A Magical World In Earthlock On Nintendo Switch This Week

Capcom has announced that Resident Evil, Resident Evil 0 and Resident Evil 4 will release on Nintendo Switch, which sees the survival horror series continue to slowly infect the portable home console.

The three games have previously been released on GameCube, and, for Resident Evil 0 and Resident Evil 4 at least, later went on to make a return on Wii.

With Capcom promising to share more news in the coming weeks and months, for now, we’ve provided the brief story overview for each game:

Resident Evil
In 1998 a special forces team is sent to investigate some bizarre murders on the outskirts of Raccoon City. Upon arriving they are attacked by a pack of blood-thirsty dogs and are forced to take cover in a nearby mansion. But the scent of death hangs heavy in the air. Supplies are scarce as they struggle to stay alive.

Resident Evil 0
The story of Resident Evil 0 takes players back to 1998. Reports have been mounting about unusual murders on the outskirts of Raccoon City. The city’s Special Forces division, S.T.A.R.S., sends their Bravo Team – including rookie cop member Rebecca Chambers – to investigate. On route, the team’s helicopter suffers engine trouble and is forced to make a crash landing, where they find an overturned prisoner transport vehicle. Splitting up to search the area, Rebecca discovers the Ecliptic Express, a train stopped dead on the tracks. Inside, she meets death row convict and ex-Navy lieutenant Billy Coen.

Resident Evil 4
Take control of special agent Leon S Kennedy as he finds himself investigating the abduction of the US President’s daughter; an investigation that leads him to a mysterious town in Europe, and something much deadlier and more horrific than the zombies of previous Resident Evil titles.