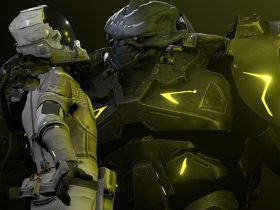 Interrogate An Alien In Quarantine Circular, Out Now On Nintendo Switch

Tozai Games has announced that Lode Runner Legacy will release on Nintendo Switch, marking the return of the action puzzle series.

You will control the Runner as you recover stolen gold from the enemies in the Evil Empire’s labyrinth in Adventure Mode, with the ability to blast floors – a technique that you can use to strategically capture gold or trap enemies.

And then, there are enemy-free levels in Puzzle Mode, 150 original Lode Runner levels in Classic Mode, and several hidden levels to discover.

There is a brand new Two-Player mode where you and a friend can play together offline using separate Joy-Con. As can be expected, cooperation and role-sharing is the key to success with the chance to capture gold that is impossible for a single player to earn – helping you to place higher in the online rankings.

The developer has also added a Craft Mode in which you can create original levels, characters, and items, which can then be shared online with other players from around the world – with all content playable in the World Levels mode, where you can “Like” the best ones.

Lode Runner Legacy will release for Nintendo Switch in Spring 2018.