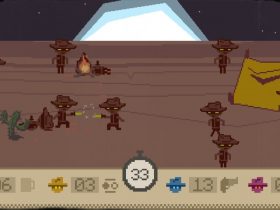 Wales Interactive and Milky Tea Studios have announced that Coffin Dodgers will release on Nintendo Switch, a dark comedic kart racer that will see you take on the role of a quirky retirement village resident.

Racing for your soul in a pimped-up mobility scooter, you will use upgradeable homemade weapons and gadgets to take on anything that the Grim Reaper and his army of zombies throw at you.

With a local multiplayer for up to four players, you can battle and knock your friends from their mobility scooters, pile up in epic crashes, and generally cause mayhem. Whereas the 3D open world Crazy Granddad mode will see you race against the clock in the Sunny Pines district.