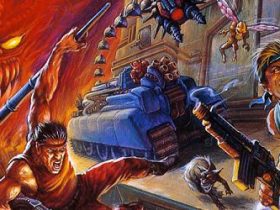 As dark secrets of his past return to haunt him, Professor Layton must journey to the bustling city of Monte d’Or in this, his timely debut on Nintendo’s latest handheld.

Summoned by a childhood friend, he seeks to avert the panic induced by miraculous miracles performed by the mysterious and charismatic Masked Gentleman, trustworthy assistant Emmy Altava and apprentice Luke Triton once again joining his adventure.

The Masked Gentleman has been plaguing the city for a month, adorning the Mask of Chaos which is rumoured to bestow great power upon whoever wears it. Layton is therefore tasked with discovering the truth behind such miracles and successfully identifying the culprit. 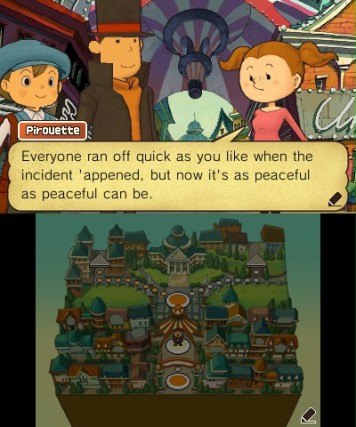 In short Professor Layton and the Miracle Mask proves a triumph, especially following our disappointment with Spectre’s Call.

It isn’t long before LEVEL-5 begin to demonstrate exactly what the boost in hardware ability allows them to achieve, the player galloping in pursuit of the Masked Gentleman after an astonishing Petrification Miracle in which he turned onlookers to stone.

Players must navigate the continually scrolling streets, dodging obstacles along the way, as the Masked Gentleman soars overhead. Then, later in the game, when learning how Layton discovered his passion for archaeology, the player must navigate their way through a dungeon. This provides a welcome change of pace, as, with a top-down perspective, players must use boulders to cross chasms and trap mummies before they capture you, whilst digging for Hint Coins, Treasures and uncovering puzzles. 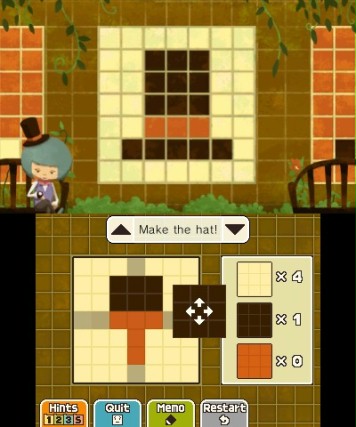 The visual presentation throughout is exquisite, aided in no small part by particularly striking use of the handheld’s stereoscopic 3D capabilities to intricately layer environments and scenery. This is Layton’s most wondrously depicted adventure yet, and players will take particular delight in every aspect.

Whilst the puzzles themselves mostly rely on the same formula as seen previously, noticeable twists ensure that they appear fresh and there are plenty of new ideas amongst the rest to challenge your solving skills even further. Whether it be rearranging tiles to form Layton’s hat, knocking blocks to form specified towers or deciphering hidden messages, there are puzzles geared to all manner of players. 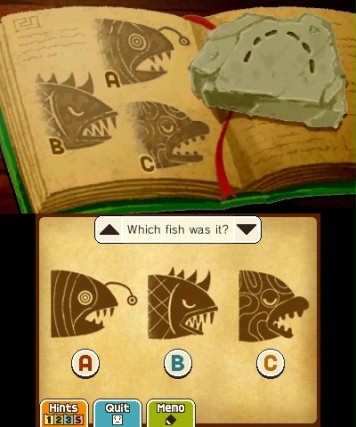 Successful completion once again rewards you with Picarats, the quantity an indication of the puzzle’s difficulty with incorrect answers reducing number earned. These are then able to be redeemed once you have finished the game within the Bonuses section, to unlock extras.

A newly introduced Investigation mode also means that you will no longer have to manically tap the environment in search of those hidden Hint Coins, the player now using a Magnifying Glass. When scanning areas, the lens will glow orange if there’s something that requires further investigation, be it a Hint Coin, Treasure or puzzle, or blue if there’s a zoom point, allowing you to look behind an object or move into a hidden room.

What does remain sluggish, however, is your movement across locations in the game, the player moving between designated orange markers. Whilst the transitions are noticeably improved, it slows the pace unnecessarily.

Layton’s Trunk returns, playing home to a range of minigames to distract you from you main adventure. You must guide a wind-up Toy Robot around a hazardous course, sell handcrafted toys in Ludmilla’s One-Stop Shop, and train an untalented rabbit so that he can return to perform at the Rabbit Show. These are welcome diversions, providing their own unique challenges.

Professor Layton and the Miracle Mask proves to be the greatest instalment in the series since its inception. With the promise of downloadable puzzles on a daily basis, Miracle Mask will most certainly keep you occupied for quite some time.