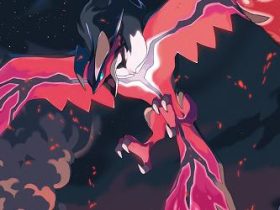 Stepping into this week’s London event for The Legend of Zelda: Ocarina of Time 3D felt like I was revisiting my childhood in itself. Link’s iconic Master Sword and Hylian Shield combo adorned the walls, a replica of the Great Deku Tree stood tall in the middle of the room, and familiar Ocarina melodies faintly reverberated from the speaker system at sporadic intervals. I felt like my 11-year old self again, back on that fateful Christmas Day in 1998 when I became so irrevocably attached to the Nintendo 64 original that for the best part of the day I largely ignored my relatives and snuck off wherever possible to continue my adventures questing across the lands of Hyrule.

For many, The Legend of Zelda: Ocarina of Time still remains to be one of the greatest games ever made. Those that missed the original release, or were too young to experience it, have already had ample opportunity to see what all the fuss is about, with ports of the game previously being made available on The Legend of Zelda: Collector’s Edition for GameCube and more recently through the Virtual Console service on Wii. Yet in the celebratory year that marks the 25th Anniversary of the franchise, Nintendo have turned to Japanese developer Grezzo to re-work their most beloved classic for an entirely new generation. 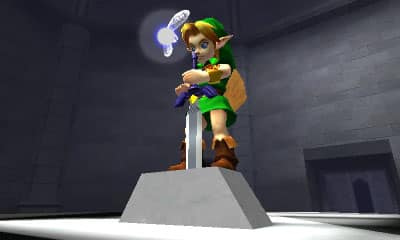 This was the second time that I’ve been fortunate enough to get my hands on The Legend of Zelda: Ocarina of Time 3D ahead of its mid-June release, having previously played an earlier build back in January at the Nintendo 3DS event in Amsterdam. However this time around, all those present were lucky enough to get our hands on the finished product. Needless to say, I was all too happy to dive in…!

Largely, for those that played the original, this is the game that you know and love, spruced up with a range of enhancements and additions to core gameplay alongside vastly improved visuals – something that was evermore evident by the presence of a row of Nintendo 64 consoles which, even at a quick glance, shows just how much effort Grezzo have made.

Having each been given three distinctly different parts of the game to explore, I spent my time trawling my way through the Great Deku Tree, Forest Temple, Fire Temple and even managed to rescue Epona from the clutches of Ingo at Lon Lon Ranch amidst all of that.

The benefit of updated visuals may seem particularly trivial to the modern-day gamer, who regularly reaps the reward of high-definition graphics, but to those revisiting Link’s legendary quest through Hyrule such graphical improvement becomes an incredibly rich experience. Rather than being barren spaces as in the original, shops are now brimming with items, buildings have far more textural detail and previously 2D backdrops are now fully rendered.

With the additional depth granted by the glasses-free stereoscopic 3D capabilities of the Nintendo 3DS, this makes for a particularly welcome treat to cast your eyes upon. I kept slamming the Master Sword into its stone holder at the Temple of Time, just to gaze in sheer wonder at the graphical transition between Young and Adult Link – I’m sure the Nintendo staff member to my side was puzzled as to what I was doing! 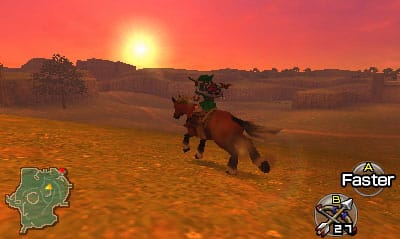 Incorporation of the touch screen now also means that switching inventory items is all the more easier – able to be mapped to X, Y and B as well as a further two slots (I, II). Further inclusion of an area map also being present ensures that you don’t lose your bearings, whereas a quick tap will allow you to communicate with Link’s now infamous fairy companion, Navi.

You are also able to implement use of the Nintendo 3DS’ gyro sensor whilst looking or aiming projectile weapons in first-person view. Whenever you enter the view, the game focuses the point in which the top screen of the handheld is facing as the centre (so be wary if you’re pointing the top screen to the floor), from which if you lift the device up, down, left or right you can then freely turn your view. I was a little wary thinking that it may feel gimmicky, but it actually allows a far greater degree of precision when aiming for targets or enemies than that provided by pure use of the Circle Pad.

I was also intrigued to test out the Ocarina of Time itself, to find that it is now mapped to A, B, X, Y, L and R, with each button corresponding to a different pitch on the instrument. Thankfully, unlike recent Nintendo DS outing The Legend of Zelda: Spirit Tracks, the player isn’t required to blow a steady airstream into the Nintendo 3DS’ microphone to play each note (I can’t be the only one that was annoyed by that?!). Finally for those, like myself, that often forgot the pitches for the more lengthy Ocarina melodies, you’ll be pleased to know that when using the instrument you are able to navigate to a screen with each of them on. From here, you can then play along with the ‘sheet music’ per se.

A new addition, clearly aimed at those who haven’t previously played the game before or need their memory re-jogging a bit, are ‘Visions.’ Accessed through the touch screen, these are brief clips, lasting around five seconds, that provide hints as to what the player must do next in order of overcoming certain obstacles – especially useful when you find yourself stuck trying to complete dungeon puzzles, or struggling to identify a boss’ weakness. 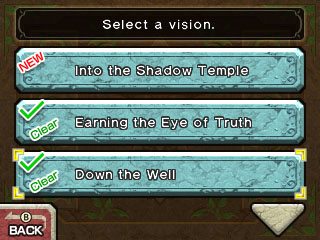 It echoes a slightly tamer form of the Super Guide, seen within recent first-party Wii software such as Super Mario Galaxy 2 and Donkey Kong Country Returns, yet merely offers a nugget of information that will hopefully then allow the player to work out what they must do.

All in all, The Legend of Zelda: Ocarina of Time 3D is certainly shaping up to be quite the irresistible purchase that Nintendo are undoubtedly hoping that it’d be. Remaining to be one of the most anticipated games for Nintendo’s latest handheld, I can see no reason why anyone should deny picking this up.

The Legend of Zelda: Ocarina of Time 3D is due to release for Nintendo 3DS on June 16th across Japan, June 17th for Europe, and June 19th within North America.
Tags: Amazon Nintendo Nintendo 3DS Nintendo 64 Nintendo of America Nintendo of Europe Shigeru Miyamoto
0 Shares
Share on Facebook Share on Twitter Share on Reddit Share on Email
Alex Seedhouse May 21, 2011