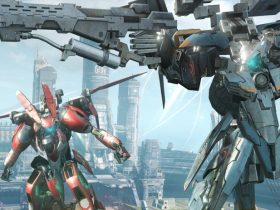 It tells the story of Michael, a man with no past who must recover his identity and decode the two events that have brought the world to the edge of collapse.

The first is referred to as the Great Wave and was an inexplicable chain of natural disasters, and the second is a pandemic that turned humans into “the dissolved” – infected beings with special cognitive powers whose bodies will eventually dissolve into blood. Michael must, therefore, hurry to avoid the impending “dead synchronicity,” when time itself will start to dissolve.

With plot twists, German Expressionism-inspired 2D art, and witty dialogue, Dead Synchronicity: Tomorrow Comes Today pays homage to classic adventure games with puzzles allowing you to get ever closer to the truth, and guiding Michael to a future he may or may not be ready to face.

The original soundtrack was composed and performed by indie rock band Kovalski, whose sound is not only influenced by ’70s orchestral rock and Italian Giallo soundtracks but “intensely linked” to Dead Synchronicity: Tomorrow Comes Today’s plot and art style.