Renovate Apartments With Your Friends In Tools Up! On Nintendo Switch

As fun and rewarding as it is exploring the beautiful, expansive world of Hyrule in The Legend of Zelda: Breath of the Wild or taking on all-comers online in Mario Kart 8 Deluxe, sometimes it can be nice to just sit down and relax with a game that’s a little less demanding of the player. Plantera Deluxe is a game that perhaps exemplifies this more than any other I’ve played on Switch, a quality that hurts it more than it helps.

Plantera Deluxe kicks things off by placing you in an empty 2D garden, an environment you will then work on populating with a whole host of plant life, wildlife and eventually expanding in order to earn more money. You’ll grow the usual assortment of carrots, apples, pears, cherries and so on all in the name of turning a profit before branching out into farm animals for the same reason.

While this may all sound like the makings of some sort of farming simulator, Plantera Deluxe is anything but, instead taking on the form of a simple clicker that never requires too much from the player. Whether it’s plucking carrots from the ground or apples from a tree or dealing with pesky moles out to steal your produce, all of it can be taken care with a simple tap of the screen or a button press. 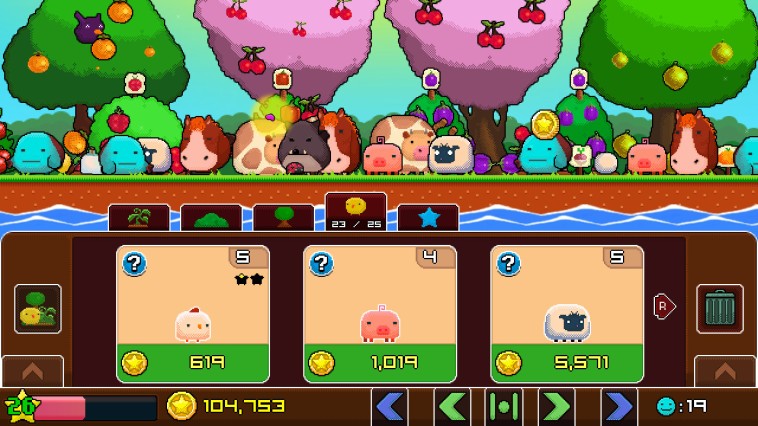 Your player level is what determines what you have access to in the game. With every new level, you’ll unlock something new that in turn helps advance your garden, earn even more money and continue to raise your level further. It’s not just about buying more expensive and more lucrative plants though; animals like chickens and cows bring in eggs and milk for example while some unlocks can even help in making your life much easier like scarecrows and dogs that aid in keeping pesky predators at bay. You can even unlock more helpers that will continue to harvest any fruit or vegetables that grow even when you are away from your garden – a handy feature that means you’ll return to a nice sum of cash every time you boot up the game.

As your garden starts to fill up you’ll eventually want to expand it by tapping or clicking on one of the signs either side of your plot. The cost for these expansions are fairly high but in doing so offers more space to plant and grow. You can also earn star shards for your items which again earn you even more cash. Once you have five you can then earn green star shards before finally unlocking the super star upgrade for that item.

When first starting Plantera Deluxe, I found myself quickly drawn to its accessible and snappy gameplay – the promise of more stuff enough to keep me wanting to improve my garden and player level. However, the game feels far too simple and limited in scope that its hooks start to loosen on you much quicker than you’d like. It wasn’t long before I had seen every item the game had to offer, and my garden had reached a stage where I didn’t really want to clutter it anymore. Even the star shards and the reward of more money wasn’t enough to keep me engaged. The gameplay too grows repetitive as you might expect from a game that wants you to repeatedly tap the screen or buttons. Plantera Deluxe starts out a neat enough distraction but quickly loses steam thanks to its lack of depth and content. 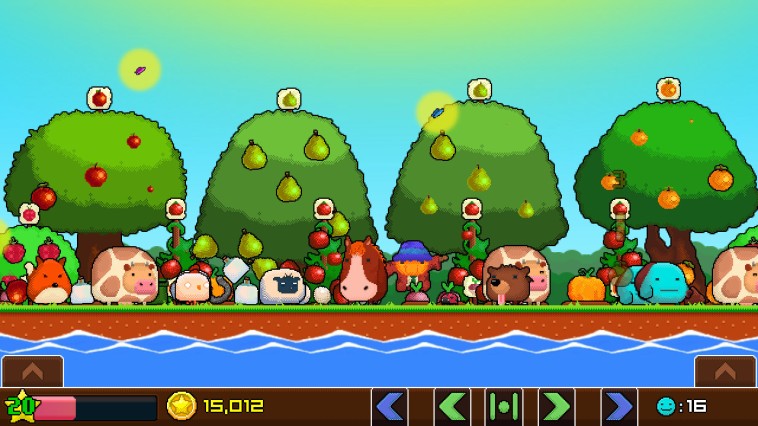 Controlling Plantera Deluxe works fine enough whether using the touch screen or analogue and buttons although both do have their issues. Moving the cursor with the analogue, for example, feels a bit jerky while using the touchscreen can feel a little imprecise especially as your garden gets busier. Still, for a clicker game such as this, they do their job. Visually the game looks and feels like a smartphone game, its style fairly simplistic and detail lacking. The audio fares slightly better but a limiting soundtrack means you’ll be hearing the same songs over and over.

Plantera Deluxe feels like the video game equivalent of junk food – you know it’s not great but it does the job regardless. And while there is certainly something to be said for Plantera Deluxe’s surprising addictiveness in the early goings, the shallow nature of the game, unfortunately, means this effect soon starts to wear off. Simple and sometimes fun for short bursts but an average affair overall.