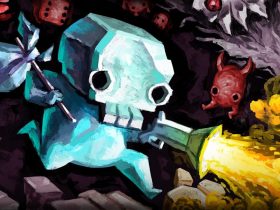 Tim Curry had once fled to space, when his Command and Conquer: Red Alert 3 character Premier Anatoly Cherdenko proclaimed that it was “the one place that hasn’t been corrupted by capitalism.” He struggled to hide his own laughter as he delivered the, admittedly ludicrous, line, but it’s hard not to come to understand Cherdenko’s fears when playing Penny-Punching Princess.

The law of the natural world had once been survival of the fittest, but, in time, the people’s values inevitably changed. That came about from the rise of capitalism, signalling the start of an era when even a Level 1 pleb could defeat a tyrant as long as they had enough money stuffed in their pockets. Where every problem had once been solved with violence, now everything is resolved with money.

In the midst of this social change is Princess, who has returned to exact her revenge on the Dragoloan family. The head of the local mob, they use the Dragoloan lending company (complete with “cash flow solutions with a smile” slogan) as a front to swindle assets through dubious means. After becoming ridden with debt, the Princess lost her father to illness brought on by the stress of it all and her country to creditors. Now, she’s back to regain her kingdom. 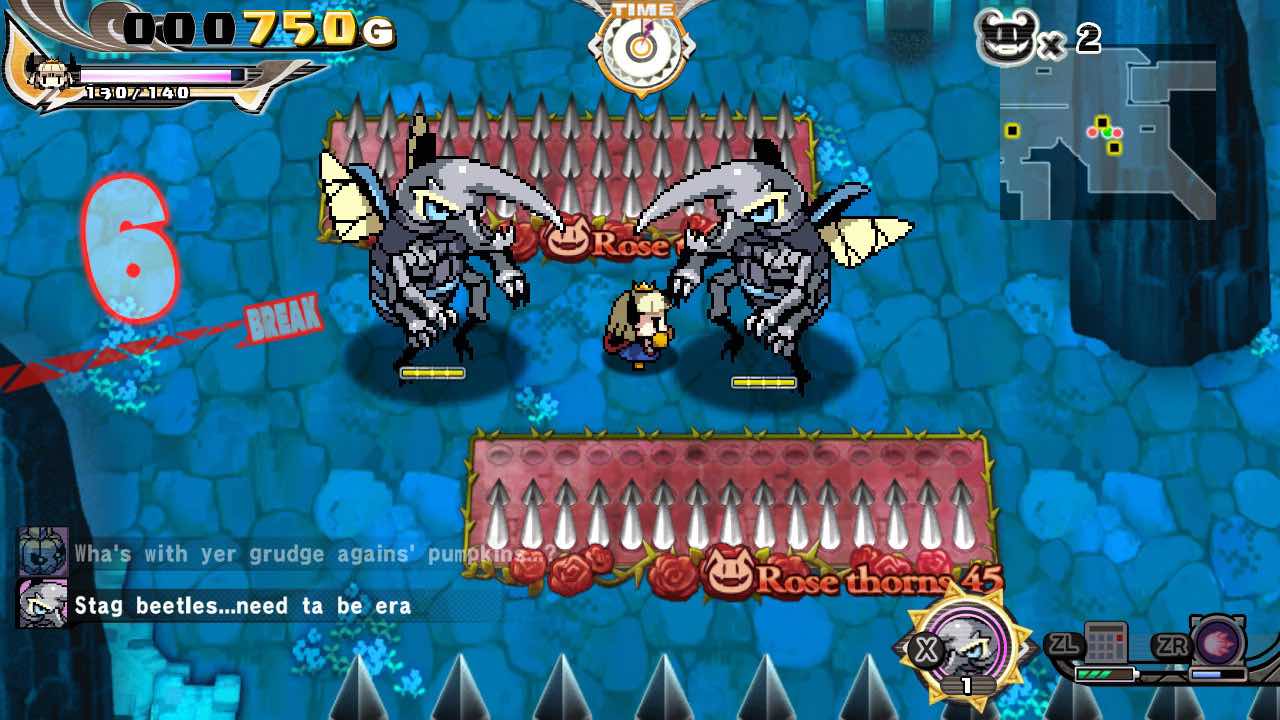 It’s a quirky storyline that sets up this beat ’em up game, that comes crammed with as much humour as it has punches to swing. That largely comes from Sebastian, butler to the Princess. This courageous Miyama stag beetle (not a cockroach!) acts as a guide and mentor to the, relatively mute, Princess, offering pointers and hurling abuse with the monsters you encounter in cutscenes. And while the Princess is the character thrust into the action all the time, Sebastian quickly becomes the star of the show as you hold out to witness his next interaction.

Penny-Punching Princess has been created in a way that it can be played in bite-sized chunks, which makes it a perfect fit for Nintendo Switch. After the opening tutorial teaches you the easy-to-grasp controls, the Princess reclaims the 512-year-old Castle Tyrannical having cleared out the monstrous enemies that the Dragoloan family has hired to guard it. Childhood home recovered, the next challenge that the Princess faces is to rebuild the kingdom that her ancestors had built.

With Castle Tryannical now your base, you will leave the safety of its deteriorating walls to set out on missions, that, early on, simply task you with defeating the enemies that you encounter. These missions are played from an isometric perspective, a pointer forever leading you in the right direction as you move from scrap to scrap. You will rely on your fists to punish the monsters that you are met with, free to alternate between a standard attack (Y Button) and heavy attack (A Button) that carries far more weight to it. Pummeling the Dragoloan goons into submission, once you deplete their HP gauge to a specific point you will inflict a Break state. This can be used as a short window to batter them senseless without fearing any retaliation, and, if you spin the Right Stick multiple times, can also reward you with some bonus cash. 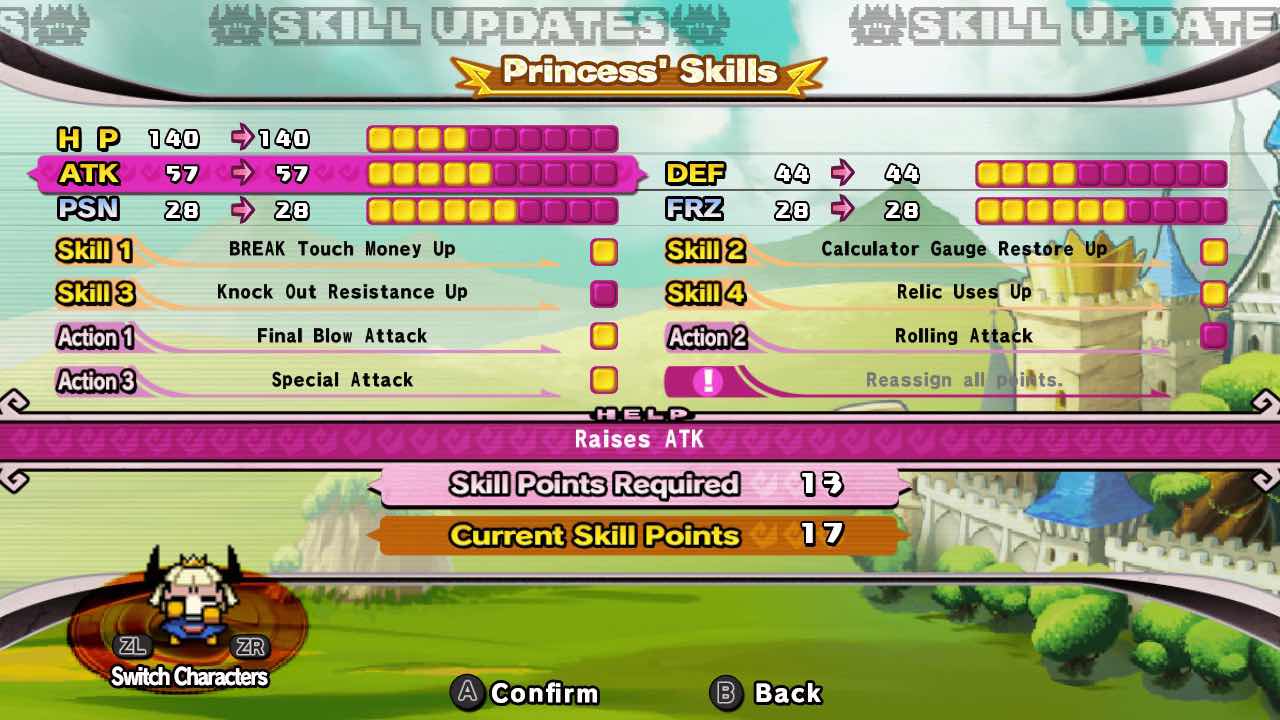 That’s right. Penny-Punching Princess really is all about money, thanks to a concept that developer Nippon Ichi Software has been able to turn into a meaningful gameplay mechanic that underpins the whole experience. After praying to Zenigami when her family was left destitute, the God of Money appeared to scorn the Princess for praying to him when she didn’t have any money to her name. When she immediately recognised the power that it could grant, Zenigami gifted her a magical calculator.

This is what helps Penny-Punching Princess stand out in the genre, as, while you defeat Dragoloan minions and punch open chests to collect money on missions, you can use your amassed coins to bribe the monsters and traps (called Relics) to rally to your side. Whether that be flame-breathing dragon statues, razor-sharp buzz saws, creaking skeletons or Life Man who can recover your health, the money that you throw in their direction after whipping out your calculator and tapping in their asking price will reward you with special attacks that help to sway the odds back in your favour.

It necessitates strategy in working out what to bribe and when, even if the game pushes you to continuously part with your cash. Whatever your bribe ends up building the population that dwells at Castle Tryannical, that, in turn, will reward you with the chance to craft new armour that strengthens the Princess and unlocks new skills for you to use. These require certain monsters in order to craft, and so there is a need to return to earlier missions to bribe enough for you to do so. But, this continues to help you expand your population that, as it hits specific milestones, will see that you are rewarded with Skill Points. These are also earned from successful missions, that can be used to raise the Princess’ states to make her hardier in combat. And, so the gameplay loop is there to hook you in, even if it could have perhaps been a little broader in approach.

Long after money has exchanged hands, Penny-Punching Princess will be remembered for the pun-packed, zany adventure that it casts you out on. The game’s inherently repetitive nature will mean it’s best chipped away at over time, but, while some imbalance with the difficulty can irritate, bribing everything in sight with the magical calculator allows it to leave a lasting impression than others on the portable home console.