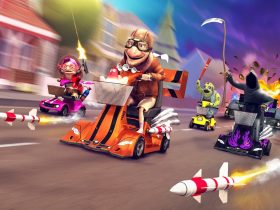 The Pan European Game Information (PEGI) has issued a rating for Mighty Switch Force! Collection on Nintendo Switch, revealing that the puzzle-platformer series will soon make a return on the portable home console.

This collection promises to let players “switch up the fun with four games in one!” However, aside from confirming cybernetic peacekeeper officer Patricia Wagon’s return, the rating does not reveal which games are included.

If I were to guess, I would predict that these will be the four games that the Mighty Switch Force! Collection will contain:

Space Hooligans have escaped custody and are wreaking havoc all over Planet Land! HQ calls on cybernetic peace-keeper Patricia Wagon to bring these renegades to justice. With the help of Corporal Gendarmor and her trusty Pellet Gun, there’s nothing she can’t handle. When the going gets tough, Wagon activates her Helmet Siren, altering the world around her. Enter the mechanical shape-shifting, dimension switching world of Mighty Switch Force! Hyper Drive Edition and blow crime away.

Combat the Planetary Inferno in the shape-shifting, dimension melding world of Mighty Switch Force 2! It’s a Code Red from the Galactic Fire Brigade! Planet Land is combusting and everything is ablaze! Return to HQ immediately and pick up your Infinity Dousing Apparatus; your Siren Helmet is still authorized and up to code! The mission: to fight the inferno and extricate the reformed Hooligan sisters! Now, suit up and start soaking some scenery!

Mighty Switch Force! Academy recalls the glory days of Nintendo Power magazine, which featured huge spreads that showed off entire level layouts on the page. We wanted to see what it would look like to play a puzzle-based pixel game where you could see the whole game at 1:1 ration on a 1080p screen. We tried it and loved the results. From there it was a deluge of inspiration — implementing classic screen-wrap (a la Pac-Man), high concept levels designed entirely around fun play patterns, 4 player versus mode, and local multi-player on every level in the game. Previous titles of Mighty Switch Force! have grown to be speedrun games, and we wanted to see how the speedrunning community will embrace a 4-Player speedrunning game.

Team up with Officer Patricia Wagon to save Tangent City from a fiery blaze! As a member of Planet Land’s Fire Brigade, your job is to douse the fire in each building — and to evacuate any Hooligan Sisters who may be trapped inside. It’s a dangerous job, but if anyone can save the city, you and Patty can! Slide blocks around the playfield, and let loose a powerful water spray from Officer Wagon’s Infinity Dousing Apparatus (err… hose). Douse all of the flames, and the stage is clear! Sounds easy, right? Block types vary from simple slide-puzzle obstacles to full-blown brain-busters like Turnpike Blocks, Mud Blocks, and Cloak Blocks. Each level has been lovingly crafted and is WayForward Certified, guaranteed to challenge, befuddle, and tickle your fancy.