Fantasy Strike Lands A Punch On Nintendo Switch This Month

You shouldn’t let somewhat minimalist appearance that Pazuru has immediately dissuade you, especially if BOXBOY!‘s joyful mischief has taught us anything this year. Beneath the Nintendo 3DS title’s arty exterior lies a fiendishly addictive puzzler, awash with paintbrush strokes that readily draw on the distinct Japanese influences that ripple throughout Jay van Hutten and Moragami’s creation.

‘Pazuru‘ in itself is the romanisation of the Japanese word for a puzzle (パズル), a meaningful association for a game that sees a minuscule ninja paint increasingly perplexing puzzles for you to beat. The premise is simple, in requiring players to direct a ball aimlessly bouncing around each stage toward yellow stars. 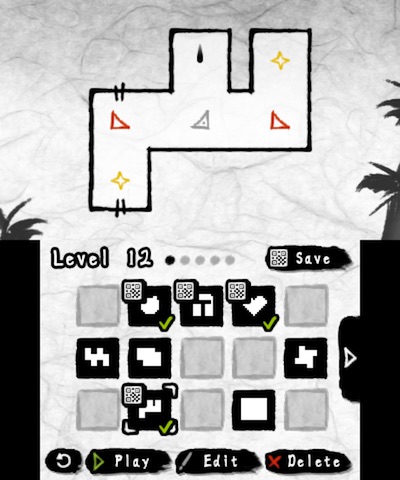 It begins easily enough, players steadily introduced to the ways in which they can redirect the ball away from hazardous spikes through using bumpers, rebound off breakable blocks, shift fixed elements in and out of existence and warp through portals. It’s largely accessible through most of your interaction being made through using the A button, leaving players to fixate on the ball’s trajectory and relying on your logic and reflexes to continually guide it safely onward.

Needless to say progression through Pazuru relies on trial and error, and while a solution may not immediately present itself your repeated efforts will eventually lead to that eventual ‘Eureka!’ moment. When all stars are collected you will move onward, and, as an additional challenge, players are scored by a separate star system judged on the amount of moves taken to complete the stage. 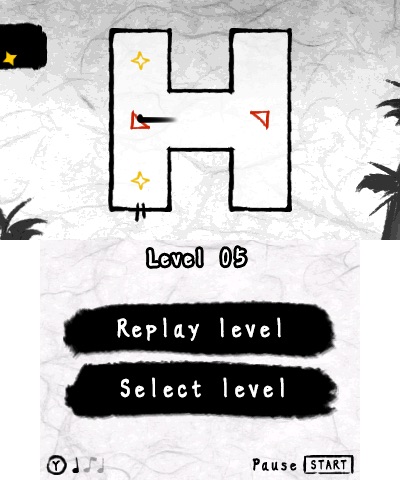 Sadly, while this heightens replay value it still won’t take long for you to tackle the modest 75 stages in Pazuru. Moragami serves up an Editor for budding puzzle creators to construct their own devious levels, which is welcome. But, as simplistic as it is to create a masterpiece with stylus-based input, sharing your creation requires you to save it as a QR Code to your SD (or microSD) Card, to then manually transfer it before distributing elsewhere. It’s laborious at best, and while players can share screenshots through Miiverse on their handheld, for some reason these aren’t displaying on the web-version to scan that way. Odd.

Pazuru ever so nearly strikes the right chord, and, while similar to van Hutten’s Ichi, presents the Nintendo eShop a unique puzzle offering. Charming visuals and an enchanting, if repetitive, soundtrack will help keep you entranced through to completion.