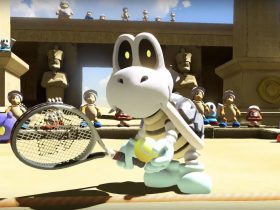 You Can Unlock Dry Bones In Mario Tennis Aces Next Month

As someone that had heard about but never played Payday 2 before, it was a confusing start to my new life of crime. After an unmarked van dropped me off outside Bodhi’s Dry Cleaning, I entered to learn that this inconspicuous location is my safe house. And then, once I’d equipped a starter kit – which had an AMCAR rifle and a Chimano 88 Pistol inside – I was asked to wander out back where an accomplice hurled another bag stuffed with money at me from a rooftop, which, after placing a wad of cash to tip Lady Justice’s scales, opened a secret entrance to what I soon realised was the real safe house.

This underground lair is somewhere that is described as your home away from home, your fortress, and your place of contemplation, lending the chance to test out different weapons, understand how gameplay mechanics work such as blasting open doors with shaped charges, drilling safes open, and disarming cameras, or you can even take a moment to stand and stare at the fat stacks of cash that you have accumulated in the vault.

The immediate problem that Payday 2 has is that it assumes that you have played the co-op shooter before, strutting into its world as a veteran heister that had taken a deserved vacation after, I presume, the events in the first game. You can move between each room in your safe house to loosely pick up each gameplay mechanic, slamming a button to prompt a brief and pointless audio description before putting what worthless wisdom they impart into practice. But this isn’t sufficient enough to prepare you for the game’s complexities. 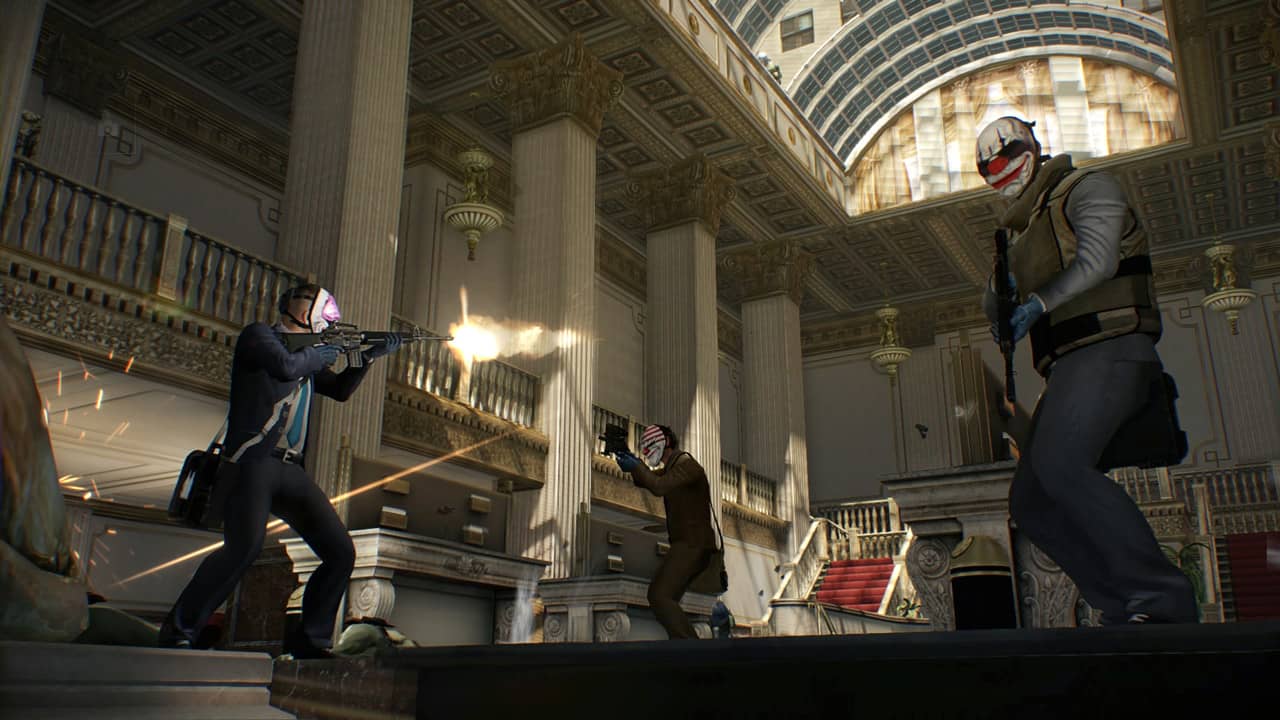 Perhaps it is an odd criticism to direct at a game that is nearly five years old, but, as I am sure that I won’t be the only one that will be playing Payday 2 for the first time, it’s important to mention. As far as I could see, there isn’t even a tutorial heist that talks you through how to case your target and approach it stealthily rather than charging in with guns blazing. That leaves you to learn through repetition, performing the same heists over and over as you learn the intricacies of their design – even if some procedurally generated elements will always throw in an unexpected curveball.

Maybe that’s the point, seeing as this is a game that not only wants to thrust you into its own anarchy but is best experienced with others – rather than one that should ever be played solo thanks to the rather moronic, AI-controlled companions that you must rely on. And the Nintendo Switch has some great options for multiplayer, surprisingly. While the majority will connect to CRIME.NET and play with other wannabe criminals online, a new local multiplayer mode called CRIME.NET Local Play presents an alternative in letting you connect four portable home consoles together – requiring that each player has their own copy, of course.

Communication is paramount to your success in Payday 2, helping to coordinate your crew’s efforts to pull off an epic crime spree. It’s a shame, then, that the Nintendo Switch Online app is still underbaked, leaving the, admittedly hilarious, online sessions that I had arranged with other journalists to be experienced together over Discord instead. With an ever-increasing collection of online games, whether that be ARMS, Splatoon 2, Mario Kart 8 Deluxe, or Rocket League – it only hammered home just how much work Nintendo has left to do to convince everyone to subscribe to Nintendo Switch Online in September. 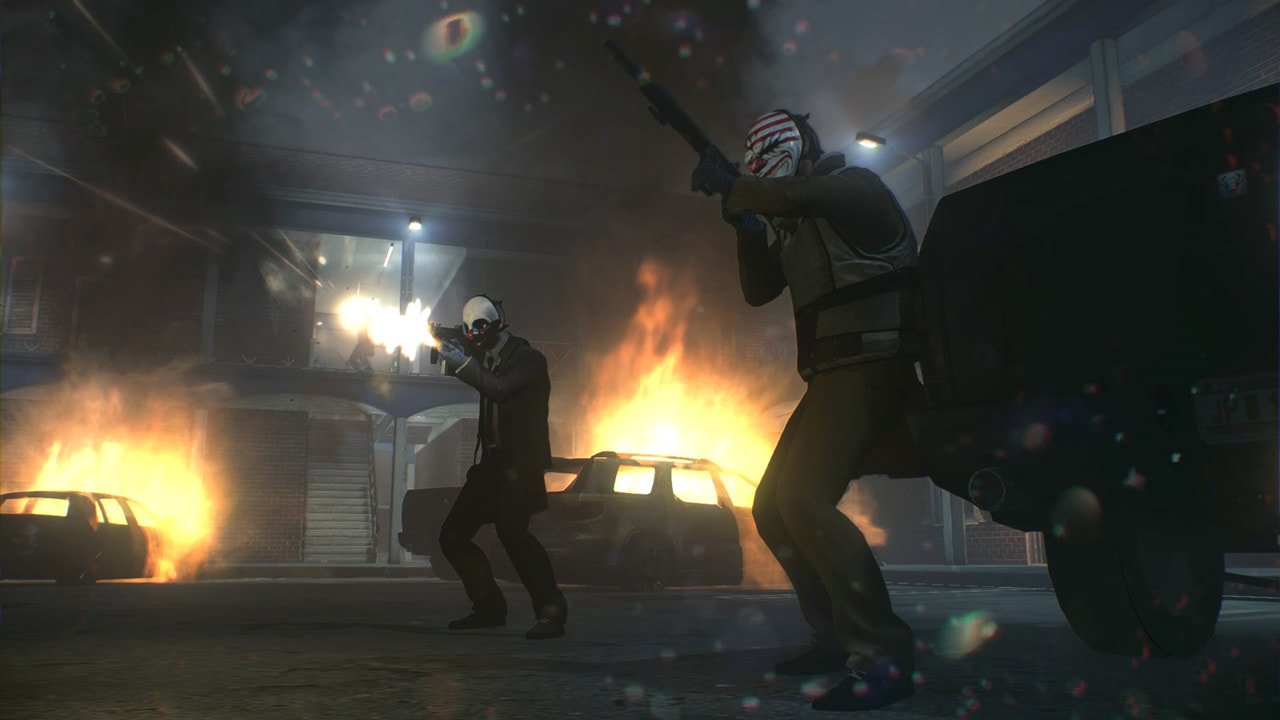 Once you quickly decide on your workaround to keep in contact with your crew, at least the mission variety will keep things interesting – even if there are a few duds in there. When you aren’t playing out standard heists to rob banks and jewellery shops, you’ll soon be using cranes to kidnap The Taxman to hack into the IRS, retrieving Colombian cocaine from a crashed plane and escorting the drunken pilot to safety, or stealing marked paintings from an art gallery. This leads to unpredictable encounters that won’t necessarily pan out the same way every time, and, when playing with friends over voice chat, soon proves itself to be an unrivalled experience in its crazed hilarity.

I know that Payday 2 on Nintendo Switch is eight months behind the content in the PC version, but as a newcomer to the game there was more than enough to keep me occupied, and, even as I write this review out, there are heists that I still haven’t had the time to tackle just yet. I can see how it comes as a disappointment to those that have already enjoyed illustrious careers as a con man, but, for now, I have enough faith to see how the developer chooses to support the game in the months ahead.

We do have a timed exclusive character in Joy, a 22-year old Japanese cybercriminal who is known to be a skilled hacker. She wears an LED mask that constantly changes between different designs, with the initial pattern replicating the neon red and neon blue Joy-Con. You can customise the mask that whichever character you choose wears, which is a nice touch, even if it is something that you never really see that often away from the menu screens. 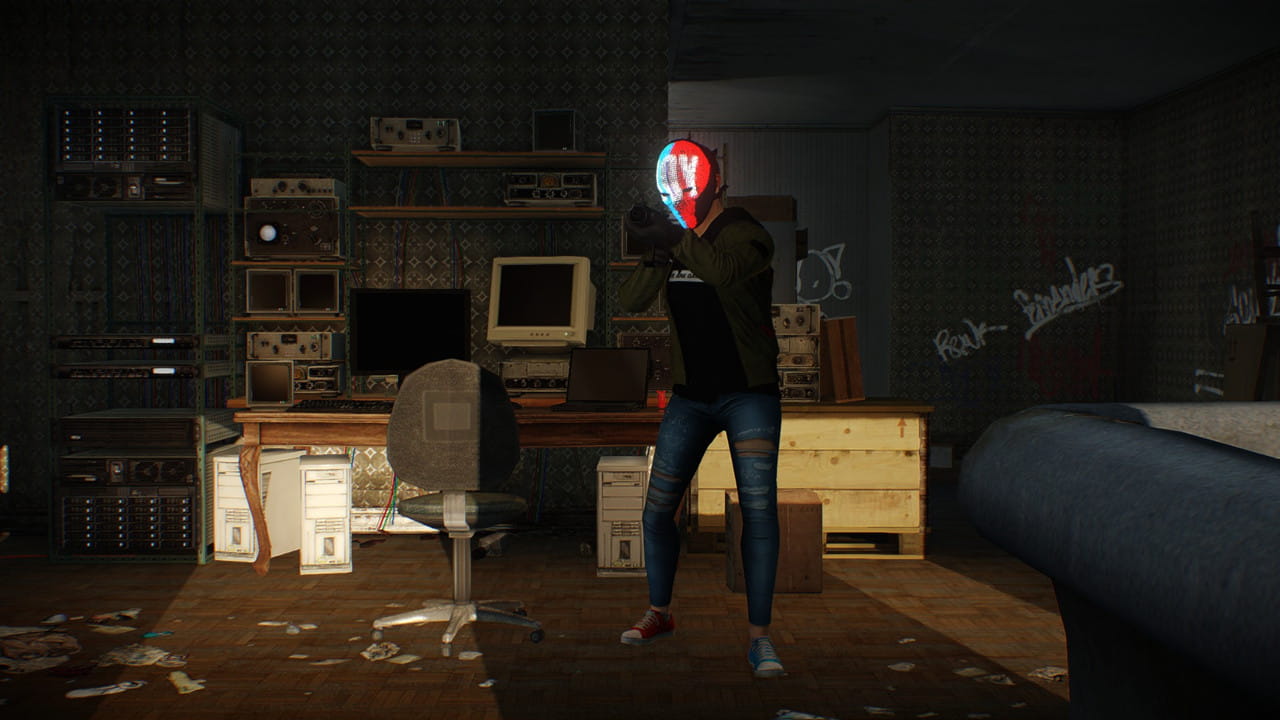 Succeed in your planned heists and you will be showered with experience and cash, which can be used to customise your character and hone their skills down a particular path. The cash can be used to buy or upgrade the primary and secondary weapons that you can carry, having an arsenal that will let you wield assault rifles, shotguns, and sniper rifles to more random choices such as longbows and flamethrowers. There’s also your armour and equipment – electronic jammers, sentry guns, and explosives – to consider, and, collectively, these all impact your concealment rating. It’ll be those that want to play any heists where stealth is an option that will need to keep an eye on this.

The experience that you earn is used to level up to unlock skills and perks. These are broken down into different playstyles to match how you want to approach the game, but it can be a little intimidating to work out where to spend your hard-earned points. Thankfully you can choose to have them refunded, so there’s never any concern in being able to play around before choosing to reallocate them. Perks are a little more basic in comparison, helping by boosting your character’s health, armour, or headshot damage for example, and are separated into decks that you choose between.

One skill that I soon learned was important to have was Sixth Sense once it could be upgraded, seeing as this opens up access to all insider assets. This is another aspect to the game that is never explained for newcomers like me, in that, on the screen before you ready up with other players to start the job, you can choose to pay money and call in favours to lend your crew a tactical advantage. That could be someone leaving you a case of thermite paste to burn through iron bars in the sewer, drones that will let you see where security guards are located, or someone leaving a window unlocked for you as an easier access point to reach your target. These can soon make the experience with each heist feel far tenser as you work to complete them without raising an alarm, and lead to even funnier situations when someone makes a wrong move to see the police called in. It’s in the moments of madness that the game constantly hits its mark, meaning that it will always be an experience best shared with others.

It’s not all smooth sailing, however. I would say that the port to Nintendo Switch has been solid for the most part in the time that I have spent with it, and I haven’t encountered any lag or connection issues when playing with others online. That being said, there are more than enough bugs to rattle on about. Whether that be policemen that randomly appear next to you, times when buttons don’t respond correctly, unresponsive AI, framerate dips in the game’s busier sequences, or even a moment in The Biker Heist when, while escaping on the motorbikes, a crewmember kept tumbling through the floor from my perspective 20 or so times that soon resulted in the game crashing with an unexpected error. It will be important for Overkill Software to concentrate on addressing these problematic instances before throwing in new content, even if they added to the game’s unabashed mayhem.

As a newcomer to Payday 2, my time spent descending on Washington DC to start a crime spree has been filled with as much genuine laughter as it has with successful heists. While the whole experience can feel more than obtuse, those that take the time to learn the gameplay mechanics that underpin it will soon find this a game that’s worthy of the endless hours that they will spend with it. It’s a shame that performance niggles readily detract on occasion, but with a little more spit and polish, I am sure that anarchy can reign once more with hindrance.