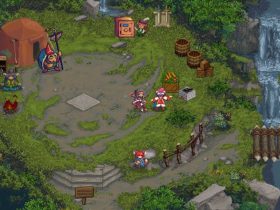 Survive An Ever-Changing Labyrinth In Tangledeep On Nintendo Switch

GameStop has revealed a pre-order bonus for Paper Mario: The Origami King for those that choose to buy the upcoming RPG from the specialist retailer.

Those that pre-order Paper Mario: The Origami King ($59.99) will receive a special pin set featuring Paper Mario and Origami Peach.