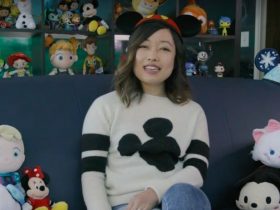 How To Draw Nemo, Olaf, Maleficent And Joy In Disney Art Academy

A new gameplay element, stickers, were revealed during Nintendo’s E3 conference that will serve as your arsenal in battles and can be used to reveal new areas in the game’s environment.

Stickers can be found by exploring each area and peeling them from your surroundings.

Here’s a snippet of info on the game’s story:

“On the day of the annual Sticker Fest, Bowser decides to pull a prank and scatters six Royal Stickers across the land. To retrieve these mysterious, magical stickers, which are now stuck onto Bowser and his underlings, Mario sets off on an adventure with Kersti, a sticker fairy, visiting prairies, deserts, forests, snowy mountains and volcanoes around the world.”

The game will also be available to download from Nintendo’s eShop at launch.

Check out the latest footage below: