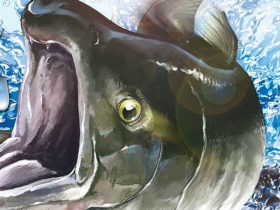 Super Smash Bros. for 3DS will include a Paper Mario stage, which marks a first for the brawler series.

Its existence was revealed by creator Masahiro Sakurai as part of his daily updates for the Wii U and 3DS iterations, who discussed how the stage is constructed with paper and therefore susceptible to strong winds.

That will see the storybook’s pages turn, which fold over and transform the stage into an entirely new environment. One such example that Sakurai provided was the S.S. Flavion, a ship that appeared in GameCube’s Paper Mario: The Thousand-Year Door.

“For the first time ever in the Super Smash Bros. series, here’s a Paper Mario stage! It’s made of paper, so strong winds will blow it away,” Sakurai wrote on Miiverse. “Since the stage is paper, it transforms when it folds over and opens up again. This ship is the S.S. Flavion from Paper Mario: The Thousand-Year Door.”

Super Smash Bros. for 3DS will release across North America and Europe on October 3rd.