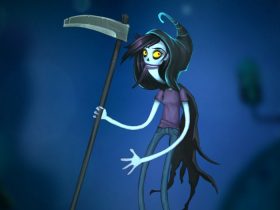 In 1958, physicist William Higinbotham is thought to have been one of the first people to ever to make an interactive video game. It was a simple concept called Tennis For Two and was shown off 13 years prior to Pong’s historical debut. Over the next six decades since that oscilloscope-based experiment, the gaming industry has expanded, fallen, and risen once again with so many games to have come and gone over the years. Only a handful of names have ever really stood the test of time within this form of media, and Pac-Man is most certainly one of those cherished few. And by the looks of it, he doesn’t seem to be going away anytime soon.

For a start, Inky, Blinky, Pinky, and Clyde make a welcome return after their absence from the last game, only now they’re accompanied with the sleeping ghosts that did overtake them in that very sequel. The rules are quite simple, challenging you to collect the trail of pellets while waking up the sleeping ghosts. The ghosts will then dive from their slumber and piggy-back each one of the four iconic duppies depending on what difficulty you choose. Traditionally in Pac-Man lore, a ghost would usually kill you instantly if you are caught. However, in this case, you can bump into them a small number of times until they finally get miffed off enough to race towards you with the touching death. Having the ability to bang the ghost about a bit may seem easy, but it’s more knowing when to bump them than reading how to avoid their retaliation while keeping on your route that deepens the strategy further. 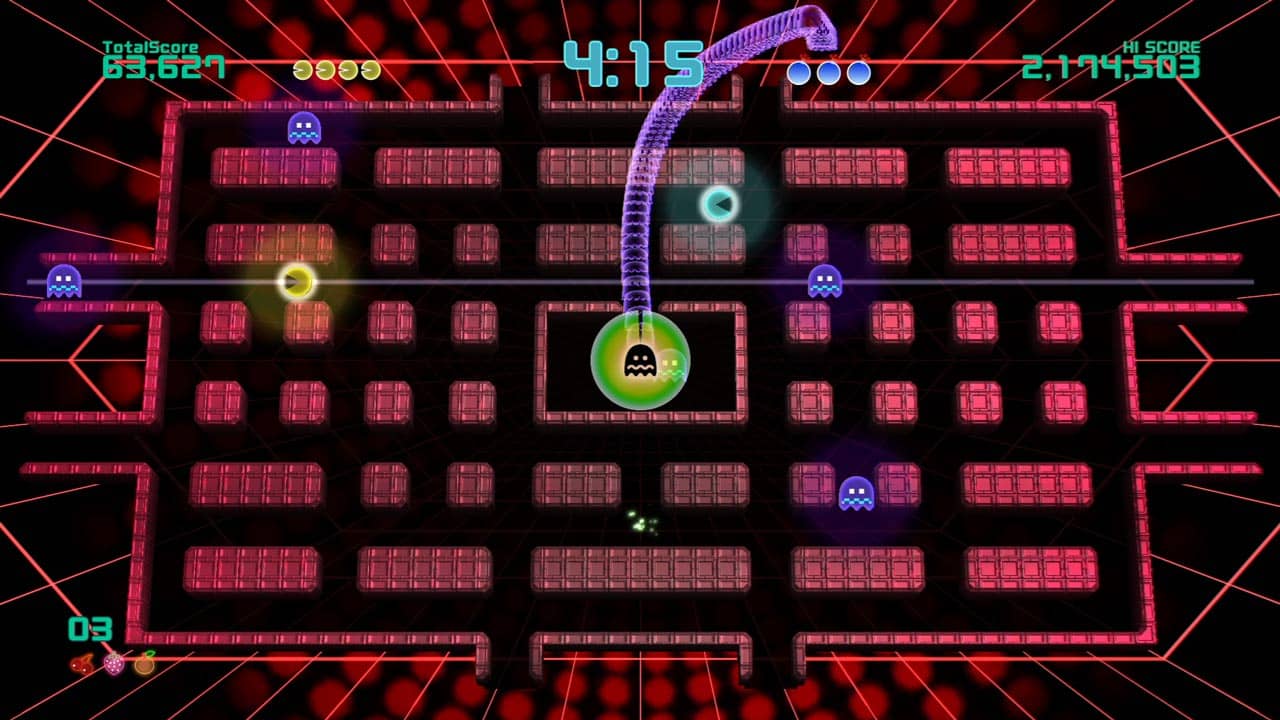 Each stage will have a required amount of pellets that you must chomp down on to enable a fruit to appear in the safe spot of the map. Grab the fruit and you will dive face first straight into a new maze. At certain points, you will have a special meter that you must fill in order to spawn a power pellet. Eat one of these bad boys and you can the hunt every ghost you have awoken like a starving dog to rack up the points. It all leads to a mad dash of addictive fun as you work out the fastest and most rewarding way to the next maze you can possibly find.

In Score Attack (which is by far the most addictive) you have five minutes to gather as many points you can fathom to plant your name on the leaderboard. The more time you spend on each map, the more accustomed to the layout you become. This may seem obvious, but knowing when to use things like your bombs (which can be obtained by eating all the pellets) to blast you back to your safe zone to save time, or learning how many pellets you can afford to leave before your transition urges you to shape your run down to a fine art form like a sculptor with a block of marble.

The other mode that you can find in Pac-Man Championship Edition 2 Plus, is the Adventure mode. Each stage requires a certain amount of collected fruit in order to move on to one of the 40 levels laid out before you. Everything is done under an extremely tight checkpoint system where a few wrong turns will cost you the game. This can prove to be very tricky on higher difficulties, especially when trying to corner the un-cooperative fleeing ghosts after downing a power pellet under pressure. 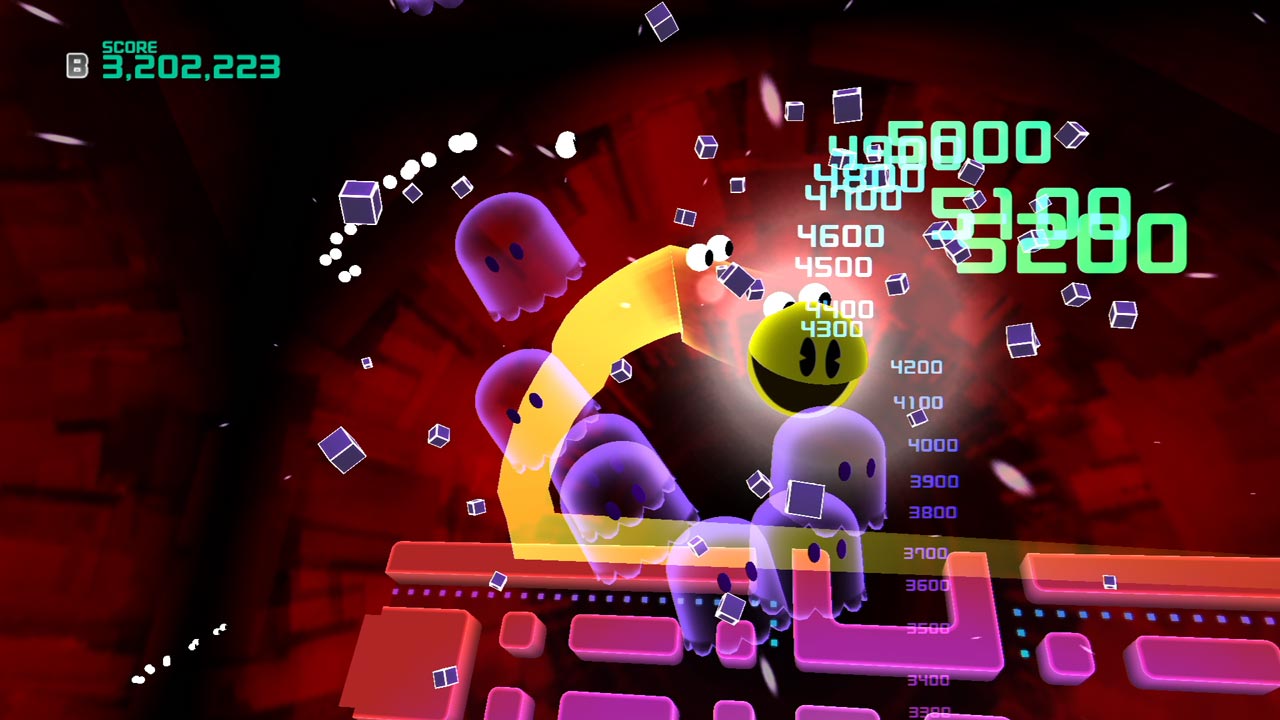 What makes this mode a bit different though are the boss encounters at the end of each segment. Although, to put it bluntly, to call it a boss fight is certainly stretching it a bit. The idea is to blast through the stages while collecting as many lives as possible. The giant ghost in the background will eventually stamp the stage to agitate the loitering spirits, pushing you to watch your back as you need to have a certain amount of lives to actually clear the stage. Once all the fruit are collected and your lives hit the requirement, a Pac-Man clan made up from your life-stock begin to feast on the giant ghost like a horde of zombies. While this isn’t exactly a boss fight in the traditional form, it does add a bit of diversity to the gameplay. On the other hand, the added Nintendo Switch exclusive multiplayer element does provide a proper boss battle for you to sink your teeth into.

You see, what makes this certain port a little bit more special is the multiplayer component that is added and acts like a separate title of its own accord. You select it as its own thing when you boot up the game, giving you the choice to play it either solo or co-op. To play this mode on your own would be a disservice though, as it never quite captures the magic that playing with a partner provides.

Similar to the Score Attack mode found in the main game, You have five minutes to rack up the points between you and your partner to reach your conjoined high score. The rules are a little different this time around as well. Clearing a stage requires you to chomp on all the pellets until a fruit bubble appears in your gob – giving you both the cue to join faces where you both “pop the cherry” so to speak. In conjunction to this, you can no longer nudge the ghosts as they are already now hostile out of the gate and ready for lunch themselves. Falling victim to one of the wandering spirits forces your partner into reviving you back to health, very much to how you would in something like Gears of War. Gobbling the ghosts plays a little different also, with both players devouring the train at each end like, er… spaghetti in The Lady and the Tramp. 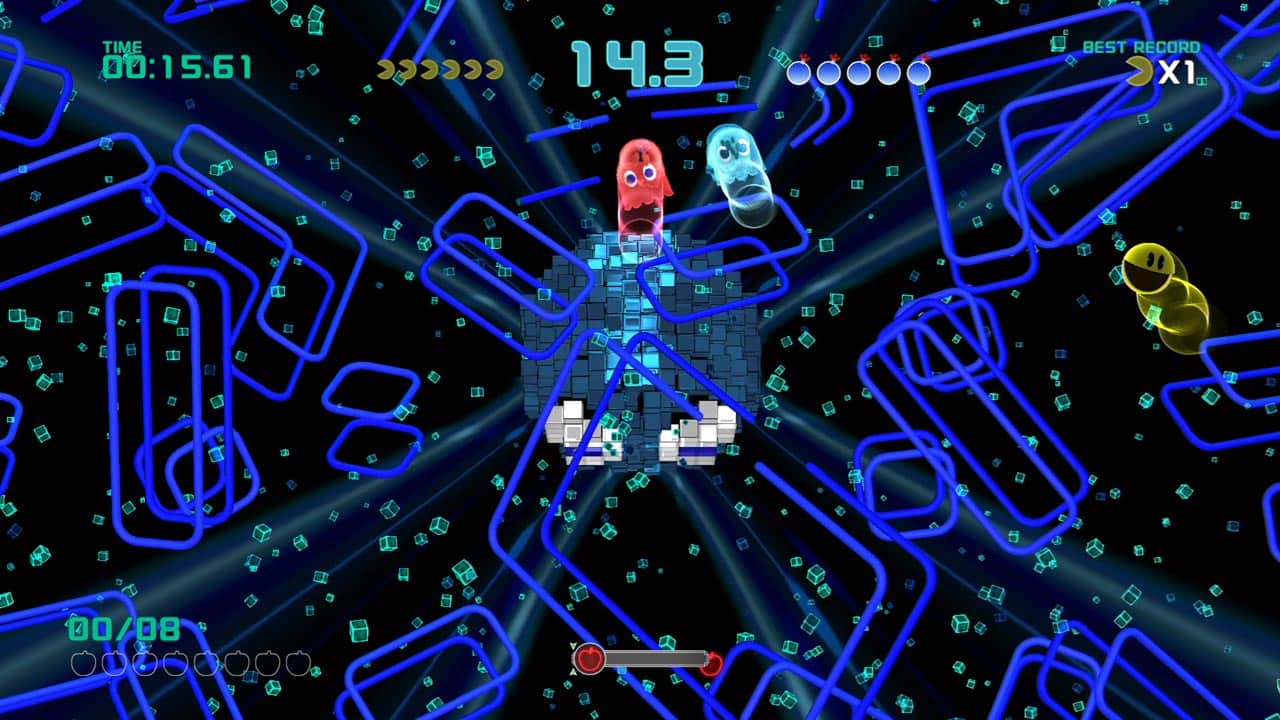 This leads to you and your teammate really looking out for each other while keeping your eye constantly on the ball. The faster you clear a stage the further you get, leading to a side-on encounter with the boss ghost. When faced with the boss you need to earn a power pellet to bounce into them to inflict the pain. It’s fun, it’s fast and it’s satisfyingly addictive as you both plot the best route to see how far you can get. It also feels quite different to the other modes, making the whole package a much more fuller experience than what is usually presented in earlier games.

It’s all visually exciting as Pac-Man flies towards the screen munching on a huge line of ghosts like Kevin Smith with a box of cereal. There’s plenty of cosmetic customisation to experiment with here too, giving you the option to change the visuals of pretty much everything and anything. The only thing that I do wish you could customise though, were the colour of the second player’s Pac-Man. It’s quite easy to get lost in the chaos and the ghosts can be a little too similar in colour.

I did notice a bit of stutter every now and again when things got a little hectic, but it didn’t really feel like it affected my movements. Besides this little hiccup, everything does keep visually faithful to what you would expect from Pac-Man. BGM fits perfectly too and can be adjusted to suit your mood, with fast-pumping tracks that wouldn’t seem out of place in a warehouse rave. When all mixed together with the visuals and blistering gameplay speed, it all becomes a stimulating, almost psychedelic experience – as if you have taken something illegal with your eyes.

Pac-Man Championship Edition 2 Plus is a perfect fit with the Nintendo Switch. It’s easy to pick up and impossible to put down – especially when trying to hit that target score. With plenty of variety and levels to play through, there’s quite a lot to get stuck into. However, if you are anything like me, you will probably spend days alone fine-tuning your run, just trying to get that S rank on the first map.