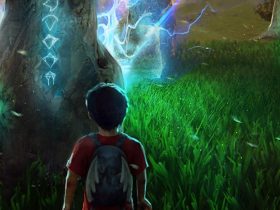 It’s been five years since we’ve seen a new Dynasty Warriors-tinged adventure with the Straw Hats and the various other interesting characters that populate the One Piece series. One Piece: Pirate Warriors 3 was an enjoyable game that looked and ran well on the Nintendo Switch, so a lot of fans were looking forward to how the fourth entry in this fan-favorite crossover series would fare. Unfortunately, while the gameplay takes many leaps forward compared to its predecessor, this Switch port takes just as many fumbles that will make your mileage vary.

I’ll say now that if you aren’t familiar with the One Piece manga or anime this won’t really be the game for you. While Pirate Warriors 3’s Dramatic Log attempted to retell the story from the beginning up until where the manga was in 2015, One Piece: Pirate Warriors 4 takes a different approach that makes it hard to recommend to newcomers.

This game starts the story at the Alabasta Arc (roughly 100 episodes in) and jumps around until it reaches an original story based on the current Wano Country Arc. Half of the game takes place before the time skip, and the other half takes place after. So, new to the Pirate Warriors games are the Whole Cake Island Arc and the previously mentioned Wano Country Arc. Like I said, I wouldn’t really recommend this if you aren’t familiar with the story. I’m a new fan myself and I had to have my roommate constantly connect the dots, because without prior knowledge of the story this game is downright nonsensical.

Pirate Warriors 4’s Dramatic Log is essentially a compilation of best moments in chronological order, letting you play as any relevant character during that story beat. I only wish that the quality of these arcs wasn’t so inconsistent. The Alabasta, Summit War, and Wano arcs had a lot of fun mission variety and moments, but the other three were unmemorable at best and just plain unfun at worst (looking at you, Whole Cake).

The mission design here tends to feel half baked overall, but fortunately, they don’t overstay their welcome. I enjoyed the Wano arc’s mission design since it took the most risks, and while the story boils down to “Everyone just shows up to save Luffy or talk about saving Luffy” it still was simple fun to see the characters interact more. I wish there had been more missions for this arc though because it has the smallest amount of the bunch. The entire story took me around 16 hours to complete, but there’s plenty more content to play after you finish that with more coming after launch.

The gameplay is the biggest star here, and while some people are bound to miss the unique partner mechanic of the previous game I think the new improvements to combat make up for it. In an attempt to address the complaints of Pirate Warriors stages being overly flat and not too fun to traverse, the scope of locations has been greatly expanded to reflect the direction developer Omega Force and Warriors games have taken.

Instead of consisting of mostly small bases connected by thin corridors, every map feels unique and can now feature elevation differences. To compensate for the new freedom Omega Force has added a jump button, which is a really big deal in making the combat feel more fluid. Every returning character has been rebalanced and changed up, and in my opinion, they all play much better than how they played in Pirate Warriors 3.

Each character is assigned one of four playstyles: Power, Speed, Technical and Air. Despite this classification, I still felt that every character I played felt completely unique. There are characters I didn’t enjoy still like Nami and Usopp, but with enough customization, you can probably get them playing to your preferences. Another great addition is allowing for players to equip up to four special moves to use in battle, each mapped to a combination of the right trigger and a face button.

The medal system for character growth has also been expanded on, with neat skill maps. There are generic maps that give general benefits to every unlocked fighter, but also character-specific maps that let you unlock new special abilities and combos for each character. Since each island on these maps requires the use of medals and money it led to my characters growing at a very solid pace, but I still found that the game’s difficulty felt uneven. Warriors games are notorious for Normal mode being too easy and Hard mode being for too hard, so while I was disappointed this was also the case it didn’t stop me from having a blast plowing through thousands of enemies each mission.

Another improvement over the original is that it focuses far less on forcing players to capture territories, but doing so is encouraged by giving you stat increases. Every single area also has destructible environments, but this mechanic feels a bit underutilized. I like that it adds to the crazy levels of destruction that comes with these kinds of games and can make traversal in big cities more manageable, but the missions rarely require you to use this for anything of value.

Which is why it’s such a shame to say that I’m pretty sure this is the reason why this port ended up being so underwhelming. It’s not the performance that suffered here surprisingly, but the visuals… although I guess there are some issues with that as well. The game runs smooth both in handheld and docked play with only some occasional dips in framerate, but I should mention that the performance tanks if you decide to play the game in split-screen.

That same roommate who I mentioned before and I decided to test it out, and unfortunately, it did not work out too well on the Switch. Not only does it seem to frequently drop to around 15 frames-per-second whenever anything chaotic happens on screen (which is constantly), but it’s impossible to read the shrunken down maps for each player. This is also the only time where I saw the game softlock leading us to have to reset the entire game. If you play this with friends, definitely have your own copies.

Even if you are playing the entire game in single-player, you won’t be able to avoid some very unoptimized visuals. I’ve played a lot of ports on my Switch, and this probably has some of the worst model and shadow pop-in I’ve ever seen on the system. This is just speculation, but since most of the environments can be destroyed I think they’re loaded in separately from the rest of the level. The draw distance is incredibly low which makes sense given the hardware limitations, but the transition for loading in those assets is far too sudden. This meshes poorly with the fast pace and movement speed of the characters. All of that combined leads to a game that runs well enough but is still extremely poorly optimized. Entire buildings frequently just pop in right in front of you, and no map is free from this.

This is strange because the game did not sacrifice resolution leading to what looks to be 720p undocked and at least 900p docked (I have no programs to test this, unfortunately). They should have lowered the resolution to make texture pop-in less of an issue, but the high resolution just makes it stand out more. Look at any still image and the game looks actually good, but in motion, it just doesn’t look too good.

The other major issue is the load times, which might be some of the longest I’ve seen on the system. During the Dramatic Log mode, each mission can take anywhere between a minute and a minute and a half just to load everything. What’s odd is that this seems to only apply to Dramatic Log and Free Log (which is essentially Dramatic Log but letting you play as any character), and not Treasure Log. Treasure Log missions tend to load at 10 seconds at most, so I assume this has something to do with cutscenes but I’m honestly not sure. There have not been any patches since launch to address this, and I’m not sure if there will be.

While the gameplay segments have poor visuals, I have to commend the team who made the cutscenes. They adapt the style of One Piece wonderfully in 3D, and are leaps and bounds better than what was in the third game. It’s also nice to see the manga-style storytelling of that game dropped in favor of decently made in-engine cutscenes. The story itself is nothing too special and mostly exists for fan service but I still found it more enjoyable than the previous game. The dialogue tends to have a variety of typos and weird translation choices that pop up but it’s mostly readable. The best mode in the whole game is Treasure Log, which features original scenarios involving One Piece’s expansive cast interacting with each other. I respect the team for writing and recording so many unique lines of dialogue for each character in every single one of these missions.

After all is said and done, One Piece: Pirate Warriors 4 has left me conflicted. The gameplay and character customization is some of the most fun I’ve had with the Warriors games but it’s brought down by a rough port, poorly paced story, and inconsistent mission design in certain areas. I also disagree with the choice to not set the entire game after the time skip, which would have meant the team wouldn’t have been stretched so thin when it came to adapting this material. I enjoyed how the older content was adapted, but it ends up leaving the story and mission structure across the arcs feeling uneven. If the game had been more focused and not tried to adapt as much as possible with only six arcs it would have resulted in a better product. I don’t hate this game in the slightest and I’m still playing it every day, but I can’t help but think about what could have been improved. I hope the issues with the visuals I mentioned are fixed in the near future, but as of now, we are left with a port that indulged a bit too much in the Pop Pop Fruit. If you love One Piece then you’re going to have a great time with Pirate Warriors 4, but that doesn’t mean that it isn’t flawless.