Jeremy (@JeremyBTyler) shares his thoughts in looking forward to Square Enix’s Heroes of Ruin, due to release for Nintendo 3DS early next year.

It seems like the Nintendo 3DS is finally getting into the swing of having good games to accompany a great system.

I recently picked up Super Mario 3D Land and it is everything I expected from Nintendo at launch. Other great games are coming out soon, like Mario Kart 7 in December and Kid Icarus: Uprising, which does not have a release date as of yet.

Another game that I am looking forward to, that isn’t a first-party title is Heroes of Ruin, published by Square Enix.

I don’t consider myself a hardcore gamer by any means, I tend to play through games on casual or normal, but I do like a good RPG though. I can’t even begin to tell you how many hours I’ve spent playing games like Dragon Age: Origin, Dragon Age II, Fallout: New Vegas, Dungeon Siege III, the Fable series, etc.

I have sunk close to 100 hours into Dragon Quest IX: Sentinels of the Starry Skies too, and I mention these to show my love of a good RPG. The first type of games I searched for when I purchased my 3DS release week was an RPG, and I was excited to read about Heroes of Ruin. 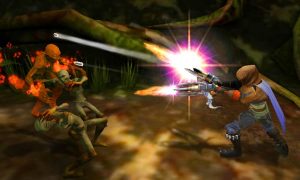 This is everything I have wanted in a handheld RPG: multiple classes from which to choose, drop in/dropout co-op, the ability to trade gear and items with friends, yet I was disappointed to discover that the game was not set to release until April 2012 in North America.

As someone that travels extensively for work, I bring my 3DS with my every week. Normal platformers like Super Mario 3D Land and Skylanders: Spyro’s Adventure are spectacular games, but only offer so much replayability. While on the road, I tend to carry a lot of stuff; like a GPS, noise-cancelling headphones, an iPad, my 3DS and games, and laptop, as well as books and magazines.

Granted the 3DS game carts are smaller than, say a PSP UMD, I just don’t want to have to keep track of multiple carriers for all of my games. The ability to carry a few games that offer hours of playtime and replayability on a handheld unit is a big draw for me, especially since I tend to play my 3DS more than my home consoles.

Call me crazy with big first-party titles like Super Mario 3D Land’s recent release, Mario Kart 7 coming out next month, Kid Icarus: Uprising coming sometime next year and Luigi’s Mansion 2 and Paper Mario 2 set to release hopefully next year, the game I’m most looking forward to is Heroes of Ruin.