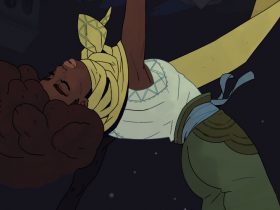 Dandara Explores The World Of Salt On Nintendo Switch

There is a saying that imitation is the sincerest form of flattery. So let’s not make any bones about it, Oceanhorn: Monster of Uncharted Seas is clearly a Zelda clone. I’m not trying to say that in a completely negative way, after all, if you’re going to copy any game series, you can do much, much worse than Zelda. Even before playing the game, I saw a couple of screenshots and I instantly thought of Zelda, but more specifically, The Wind Waker.

The game starts off with the playable character’s father leaving a letter of farewell, saying that he is travelling to oppose the Oceanhorn, the sea monster. You then gain control of our hero on an island called Hermit and your quest is to find your father and to defeat the Oceanhorn for yourself. 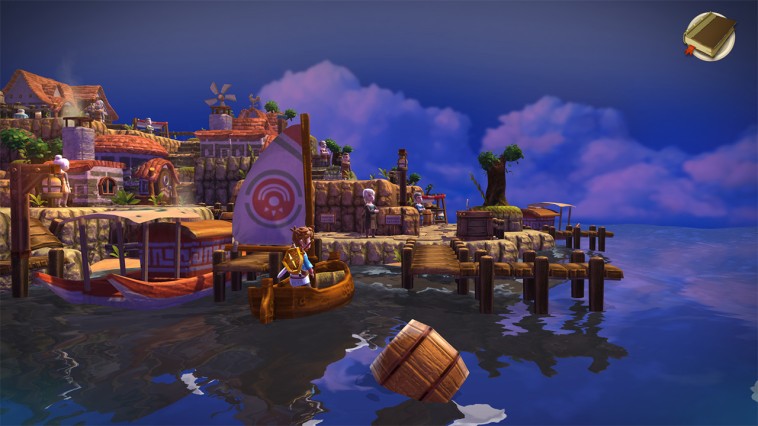 The island of Hermit acts as your tutorial hub and it’s quick to get to grasp with the controls before you head off to the other islands and you will frequently come across signposts which give you helpful tips and hints throughout your journey. You will notice right from the offset how similar it is to a Zelda game. You have a sword and shield at your disposal, you can pick up and throw things (such as pots!), cut small patches of grass, there’s no jump button and eventually, you can use items such as bombs.

Once you have done all you need to on Hermit Island you can then get in your boat and start exploring other islands. And this is done in a way that has almost been ripped right out of The Wind Waker, and I say almost because you don’t actually control the boat in Oceanhorn: Monster of Uncharted Seas, instead you just pick which island you want to travel to and the game will sail you there, which was a disappointing discovery for me. After you level up enough you gain access to a pea shooter, which allows you to shoot enemies and floating boxes and suchlike, which makes things a little more involving. But let’s just say that if you didn’t like the sailing in The Wind Waker, which I know many people didn’t, then you’re really not going to like the sailing here because it’s a little dull, to say the least. 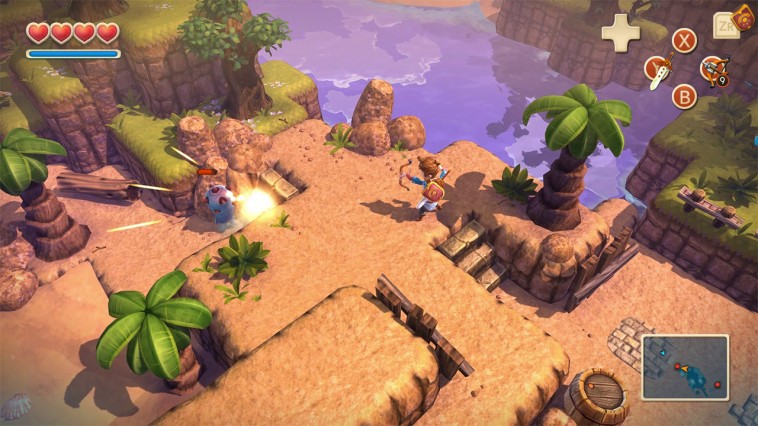 When you first see the world map laid out to you, it looks rather barren and, at first, this worried me. But thankfully this isn’t the case and you just need to discover the location first by either speaking with NPCs or reading about the islands via messages in bottles that you will see washed up on shores. This then somehow makes the island magically appear the next time you go out to sea again.

Oceanhorn: Monster of Uncharted Seas certainly shines a lot brighter on land. There are plenty of dungeons to explore, puzzles to work out and of course, enemies to defeat. The combat is rather simple and you will see that as either a good or bad thing depending on your taste. I think the bigger problem is actually the enemy AI as they often just chase you down and it’s as simple as just spamming the Y button to defeat the majority of them. They often don’t put up much of a fight in all honesty. Thankfully there are enemies that will not work on because the harder foes in the game will get a few hits in on you if you don’t try and block, so it’s not always plain sailing. 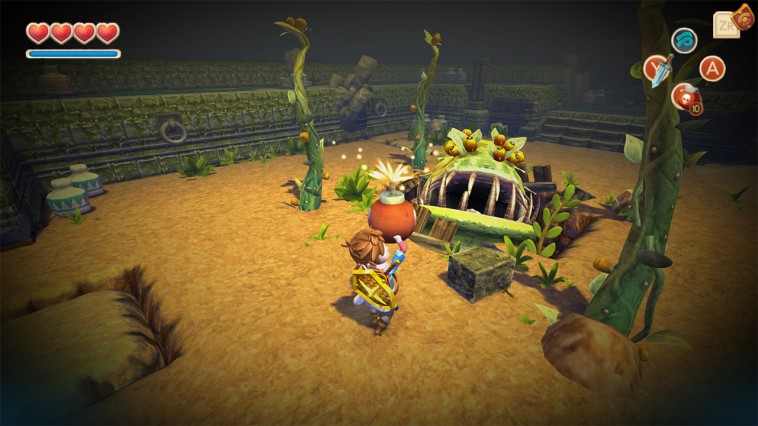 Aside from the main story quests to work through, you are also given challenges on each island. It could be that you need to throw 100 objects at enemies or blocking a certain amount of enemy attacks. It’s not much, but adding this into the game makes levelling up and gaining experience a bit more varied than just walking around attacking every single enemy that appears in the same way over and over, and it also stops the need for grinding too. It is important to level up, as you would expect, as it grants you a number of key upgrades such as additional inventory slots and being able to carry more items such as bombs. Levelling up does other things too such as grants you the weapon for your sailboat that I alluded to earlier and being able to sail faster (which is most welcome!).

On the whole, Oceanhorn: Monster of Uncharted Seas is a decent, if not overly spectacular game. I get that they are clearly massive fans of the Zelda series and wanted to do their own game in the same vein, but I would have liked to have seen a little bit more originality and uniqueness in there. That isn’t to say I didn’t enjoy my time with the game because there were moments where I didn’t want to put it down. Trying to 100 percent an island gets rather addictive I have to admit. Considering that it started life as an iOS game, I feel that the game has now found its rightful home on the Nintendo Switch. If you are looking for an older style Zelda game on the portable home console, then it might be worth you dipping your toes into the water.