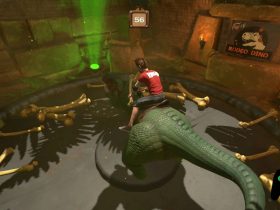 Challenge-Based Fort Boyard Out On Nintendo Switch Next Week

She’s taken over from Bowser as the final boss in New Super Mario Bros. Wii, and now Bowsette wants to save Hyrule from ruin in The Legend of Zelda: Breath of the Wild.

This new mod comes from YouTuber Lynard Killer who has created several for Link’s critically acclaimed open-air adventure, whether that be Linkle, swapping Hinox out for Bowser, or replacing the Great Fairies with those from Hyrule Warriors: Definitive Edition.

Bowsette has taken the internet by storm after Nintendo revealed the Super Crown power-up that will turn Toadette into Peachette in New Super Mario Bros. Deluxe.

The mod is an arguably simple one compared to most, swapping out Link’s character model for Bowsette and replacing his voice with Peach’s, but it’s hard to argue that it isn’t great to see Bowsette stomping around Hyrule causing chaos.