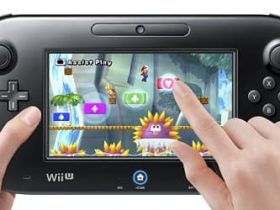 Having spent the summer showcasing how the Nintendo 3DS is #MadeForPlay, Nintendo have now turned their attention to driving their Wii U business forward in the run up to Christmas.

Their new #TheTimeIsNow campaign is led by a monstrously lengthy 7-minute gameplay video highlighting all the exclusive games currently available or shortly headed to the console. That comes in the form of Super Mario 3D World, Donkey Kong Country: Tropical Freeze and Mario Kart 8 from their current crop of software, while they draw on their E3 2014 announcements by marking Hyrule Warriors, Bayonetta 2, Super Smash Bros. for Wii U, Captain Toad: Treasure Tracker and more as being on the horizon.

That’s already an enviable line-up, and only continues to grow throughout next year with Xenoblade Chronicles X, Splatoon, Kirby and the Rainbow Curse, Yoshi’s Woolly World, Mario Party 10 and The Legend of Zelda to look forward to. Do you think #TheTimeIsNow?