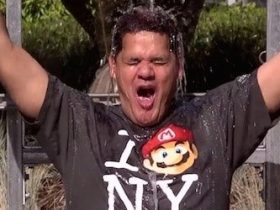 Reggie Fils-Aime drenches himself for the ALS Ice Bucket Challenge

Satoru Iwata’s comments about “limited-time” amiibo in October suggested as much, but Nintendo have reiterated that certain figures won’t be restocked beyond their initial shipment.

Their clarification came as Canadian retailer Video Games Plus suggested that the company had already chosen to discontinue Marth, Wii Fit Trainer and Villager amiibo, having reportedly been told as such by their supplier.

“We will aim for certain amiibo to always be available. These will be for our most popular characters like Mario and Link,” Nintendo shared in a statement to Kotaku. “Due to shelf space constraints, other figures likely will not return to the market once they have sold through their initial shipment.”