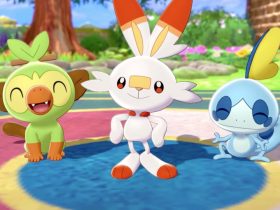 HMs Have Been Removed In Pokémon Sword And Shield

Nintendo of America have confirmed that they will share the company’s plans for E3 2015 tomorrow, sharing the news alongside a picture of Reggie Fils-Aime in the gym wearing a light pink tracksuit – a clear reference to Little Mac’s robe in Punch-Out!!.

For E3 2014, they teamed up with Mega64 to share their plans, seeing the comedy skit group infiltrate Nintendo’s headquarters by constructing Reggie Fils-A-Mech.

As they soon discovered, that saw the main Nintendo Digital Event, the Super Smash Bros. Invitational, the Treehouse take a tour of their booth on the show floor, and Best Buy setting up Super Smash Bros. Wii U demo pods.

Who’s training for E3? Find out our plans for E3 tomorrow at 9 a.m. PT! pic.twitter.com/hsOsCgUtwY