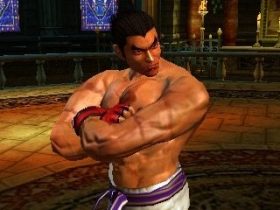 Nintendo of America’s Reggie Fils-Aime has shared his belief that “the state of the Wii U is quite strong,” with interest surrounding the company’s home console being driven by Mario Kart 8, Super Smash Bros. for Wii U and Splatoon.

It once again boils down to software spurring hardware sales, describing that trio of titles as “a great one-two-three punch.” Nintendo are now keen to deliver new software on a regular basis, and innovating with amiibo to maintain momentum.

“The state of the Wii U is quite strong,” Fils-Aime discussed with GameSpot. “The Wii U has had a strong year, and if you look back to just about a year ago to where we are today – Mario Kart, Smash Bros., Splatoon – what a great one-two-three punch.”

He continued, “And so, we know that in this business software is what drives hardware, and as long as we focus to continually bring great new software on that regular basis we’re going to continue to drive that installed base.

“The support we’re getting from third-party continues to be there. The announcement that we made with Skylanders and Activision has been incredibly well-received. And so, for us it’s about making the great content, launching great innovations like amiibo, and driving that forward.”