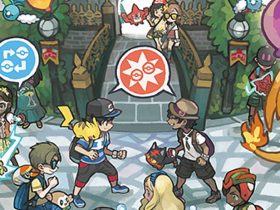 Hang Out At The Festival Plaza In Pokémon Sun And Moon

After the positive reception that The Legend of Zelda: A Link Between Worlds received last year, Nintendo have signalled that they have further handheld plans for the series.

At their 74th Annual General Meeting of Shareholders, Shigeru Miyamoto discussed the company’s intentions for the series after the board were queried about when they would share more information about Zelda Wii U.

“At this point, there are a few titles under development in The Legend of Zelda series, so please look forward to their completion,” Miyamoto opened in his response, before discussing Hyrule Warriors and how A Link Between Worlds saw the company break from tradition.

With Zelda Wii U they hope to make sure that players can “enjoy The Legend of Zelda freely in a vast world,” and again move away from the standard structure where linear progression meant that the player had to complete dungeons in order.

“In addition to that, we have ideas for Nintendo 3DS which we have not announced yet, so I hope you will look forward to them.”